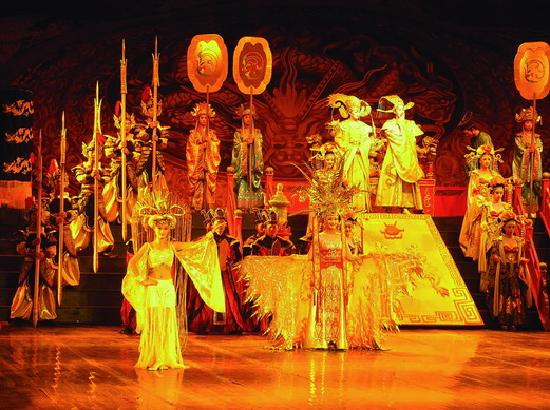 Except that this is China.  Now, really, not even I take the Romance of the Song Dynasty performance as a historically accurate guide to events.   The lasers, smoke effects, and stage lighting are probably later inventions.  But the Song is one of the most celebrated and sophisticated of Chinese dynasties, and Hangzhou was the capital city in the late Song, so there is some local promotion going on here too.   When Hangzhou was the capital of the Song, it was one of the wealthiest and largest cities in the world.

The show is only part of a replica Song dynasty Hangzhou, with many streets with shops and costumes for the tourists to wear, and trinkets to buy, and a water-splashing festival and torch festival and an embroidered ball throwing event (a husband selection process, maybe as good as any).

The big show is on a big stage, in a partly open air theater with hundreds of raked seats. The fixed stage is deep and wide - suffice it to say that it accommodates horses, and more than one at a time.  The close-in rows of seats are on a turntable, and retract to uncover a water feature, really pretty necessary in south China.

There are several episodes of the beautifully costumed and choreographed dancing, with fabulous costumes and dozens of dancers and the backflips and leaps you are accustomed to seeing in Shen Yun.  These are part of the main story, the glory of the Song and its extinguishing by the Mongols.

One of the set pieces is a battle, probably the battle of Lin’an in 1275, in which Song forces prepared for one of their last stands against the attacking Mongols.  The staged stone fort housing the Song defenders looks for all the world like the south wall at the Alamo. Mongols amassed.  The Alamo -er, Lin'an - in the background

I am pretty sure  that the Mongols had far superior numbers at Lin'an, as did the Mexicans. The attacking Mongols have cannons, as did the Mexican army, that sound pretty loud in the performance space, and the attackers are using short ladders, just like at the Alamo, and the defenders are beating them off with the ends of their pikes, and above it all stands Yue Fei, a Song leader, dressed in fabulous military costumed splendor, looking like William Barrett Travis.   The attackers have horses, on stage, and from what I can gather, the result at the Alamo was about the same as the result about 561 years earlier at Lin’an – all the defenders were killed, but the victory was short lived.  Months later, the rebel Texans defeated the Republic of Mexico, and created the Republic of Texas.  About 90 years later, the Ming rousted the ruling Yuan dynasty and drove them out of China, and the battle became an iconic struggle.  I am pretty sure that Yue Fei would have written something similar to Travis' last appeal from the Alamo -

- although he might have referenced the Song emperor rather than the country.  History does seem to rhyme.