There may be some George Washington’s hand ax element to this, since wood exposed to the weather doesn’t normally last for 400 years.  (Those who don’t know the George Washington story are encouraged to ask Rob Clarke).   But there is no doubt about the style of buildings, and that what is there is pretty old.   Even the residents.

You know that the government owns all the land in China, except for farmer land, and it is convenient to think of the government as the Big Landlord.   Everybody, from government agencies to big factories to apartment dwellers, is on a month-to-month lease.   When the landlord wants the property for some other use, there isn’t really much room for discussion.  There is compensation for moving, and it doesn’t happen overnight or in 30 days, but when the decision is taken, there is no running to tenant court to fight it.

So our group of about seven people wandering around the old town, looking at preservation and tourism promotion possibilities, had no problem wandering into people’s houses or businesses, just to have a look.   Sometimes I think this must have been arranged before hand, so we could just march in unannounced, but then I think maybe not.

We wandered into one particularly old housing unit, in the middle of another of the rabbit warren of extended family compounds.   As in most others I have seen, there are several rooms located around a center courtyard, which in this case was about 8 feet by 15 feet, with an ozmanthus tree and their well for drinking water.   The ozmanthus blooms in the fall, and smells really sweet.   Really like perfume.   In some of these older buildings, that is a welcome addition.

“Rooms” is really not correct.  These are openings, usually with not much of a fourth wall, from a walkway.  Uses are mixed- bedroom, living room, storage, workspace, kitchen, everything piled into corners and on top of other things and giving the impression that some of the piles have not been touched in a hundred years, except for the TV, which is usually not too new itself.   For those of you who have spent time in cubicle land, or in corporate private office land, think of what life would be like if there were no real fourth wall to separate you from the hallway, and you lived permanently in the office or cubicle.   For your life.  And your family has lived in the same space, next to other extended family spaces, for generations.

In our current example, I was told by the great grandmother, who got me, the foreigner, a chair to sit on (imagine what that does to one’s virile image)  that her grandfather built the compound.   The great grandmother was the picture of a very old Chinese lady.  You can imagine, but my guess would put her at probably 80 or 90 years old.

The question was what will happen to the space when the old lady passes on, and the grandmother chooses to move in with her daughter?  The great granddaughter was there, having lunch, in a space where she grew up or spent a lot of time when she was a kid.  Her age now, about 18.   She was dressed like any teenager, and she looked so out of place with her t-shirt and necklace it was clear that she had no interest in inheriting this space.   She might not have been going to college, but she was going to be living in the city, somewhere, in an apartment.   She was as far away from this space as any US immigrant is from the old country.

So we talked with the family for a few minutes, and inspected the well, and looked at another piece of intricately carved wood that had been saved from the local misguided youth during the Cultural Revolution.   I told you about the locals putting heavy mud or concrete over the carvings in Huatang ancient village, to keep them from the Red Guards who were out to destroy anything old or deemed culturally significant, especially if it reminded anyone of Europeans or emperors.   In this case, the family took the wood piece apart from its place as a lintel, and stored it above the doorway hidden by clothes and cloth coverings.

When we were through inspecting, we thanked everybody and left, and the family went back to their lives.   No knock on the door to enter, no leaving business cards when we left.  Everyone completely cordial and feeling comfortable with the situation (except maybe me, but I am getting used to it now).   Like walking into and out of a shoe store.

Accompanying Alice and me and the group was the actual honored guest of the day, Alistair Morrison.    He is a Scottish expat, who taught for many years at Purdue.   He is still sort of on the faculty at Purdue, as distinguished professor and assistant dean in the Hotel and Hospitality College.  He has moved to China, and has a three year old business doing tourism promotion work for provincial and local governments here.   He lives in Shanghai, and was joining us for a couple of reasons.  He has done some work for Shaoxing on tourism promotion, so he and Alice were discussing that, and there is the customary interest in how to make the An Chang old town appealing to foreign tourists, as a way of bringing in money when the preservation work is complete.   So he and Alice were talking about that as well.

Morrison seems like a good guy, and we talked while walking and later about many things.   But at the moment, he was the featured guest, so he got to sit next to the number 1 at lunch, with Alice next to him and me next to Alice.

The seating arrangements at lunch and dinner are always important, even when you think they might not be.   The number 1 seat at lunch was the mayor of Shaoxing County.  This is the seat furthest from the doorway at the big round table.   He was buying, so Morrison sat next to him on the left.    The real actual number 1 came in a little late, as befits his status.  This was the Party chief for Shaoxing County, and he sat to the mayor’s right.

To the right of the Party chief were four businessmen, I think all from one textile factory in Shaoxing.   They were doing okay, I guess, although the economic changes have been hell on the textile business in China and in Shaoxing, which is their claim to specialty.   But they were interested in doing some real estate development in Shaoxing, and they wanted to test the waters with the mayor and the Party leader.  Not so unlike doing real estate development in Chicago.

So that is what Alice was doing at lunch with this crew.  Alice works for the City of Shaoxing, not for the smaller County, so in CCP hierarchy her job is bigger than that of the mayor or the Party guy.   Her Chinaman, as in the old Chicago phrase for one's benefactor, is bigger.  So Alice was there, as the No. 2 government official in the City planning department, to tell the businessowners what she thought.

Lunch was eleven of us around the big table.  The usual toasts of everyone to everyone else, and in my case it was mostly get the attention of the intended toastee, get up, say a few words in English or Chinese, mostly thank you, and drink up.   That is fine, and everyone understands.   You have to keep in mind that the Chinese generally don’t drink anything with meals except tea.  No ordering a Coke or orange juice.   And one can sip tea whenever one wants at lunch, but it is less refreshing than the chosen form of alcohol.  So the toasts are a way to get some liquid refreshment during lunch, and frequent toasts are a form of medicinal treatment, to keep from having a throat so dry that you cough on your next crab claw or vegetable dish.   That is not what Alice told me, but that is my story.

After a couple of hours, we got through most of the toasts and the small talk and preservation and tourism and buttering up the leaders and the question of real estate development came up.   Alice was masterful.  She began talking, in a no-nonsense way, but she held forth.   In a room of eleven people, Alice the only woman, she probably made point after point, from intellectual to practical to economic to good of the city and the nation.   I didn’t get any of it, of course, but she held the floor, without any objections or questions or anyone excusing themselves to go to the bathroom, for well over an hour.   Everyone sat up and paid attention.  No one smoked or drank.  I don't think anyone coughed.

She told me later that she suggested the business owners not do the real estate development.  Too much overbuilding right now, and for the property they want to develop the government already has other plans.   She may get overruled, and the mayor and Party guy might be able to do that, but that is the nature of guanxi and pushing against each other in the rush to make money and a name for oneself.   But everybody wanted to hear what she had to say, and she told them.   And that is why I like Alice. 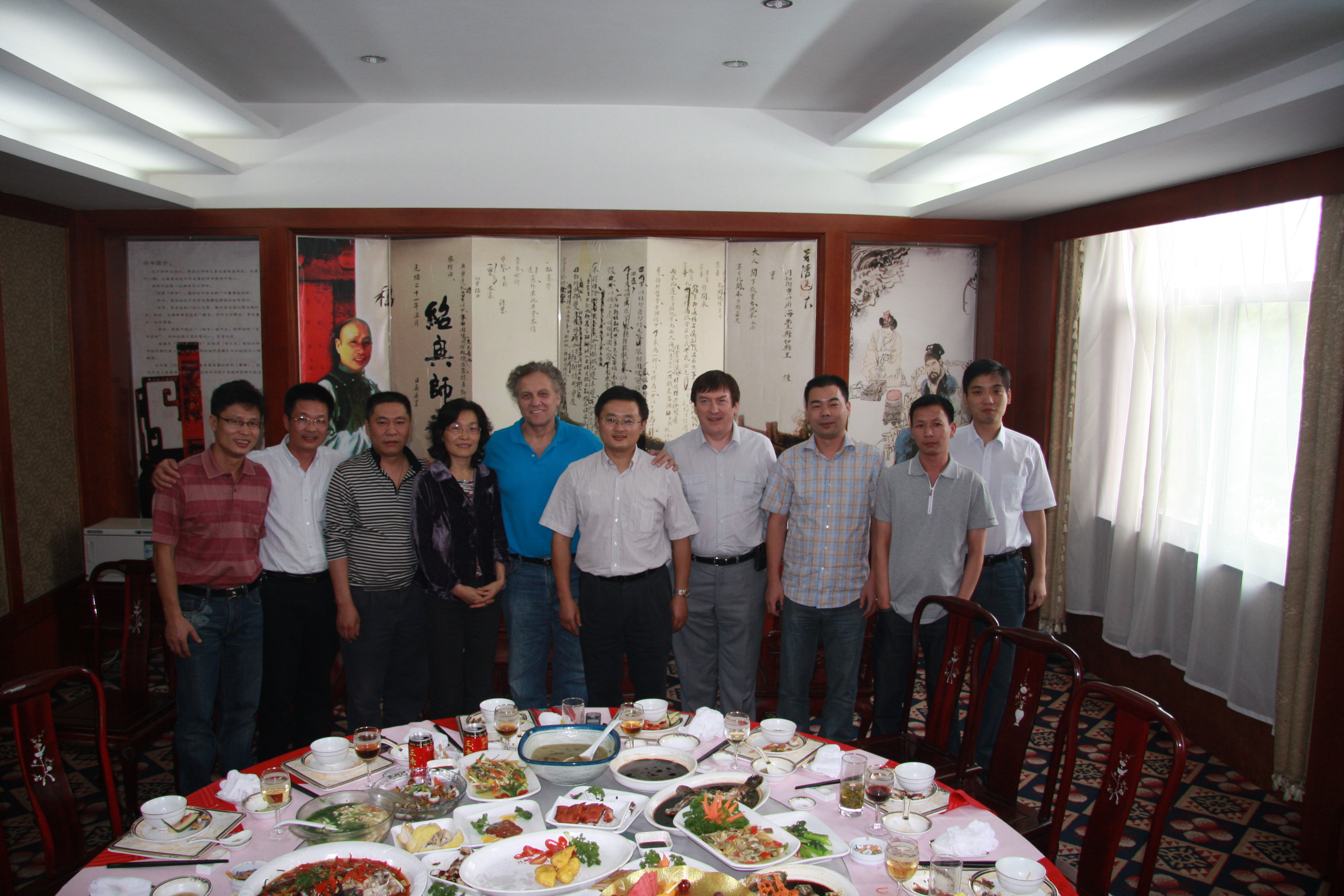