We are in Jingzhou, Qing's home town in Hubei Province.

We went out with Ben for a walk, and the Jingzhou district government compound is less than a block away.  The district is an urban subdivision, akin to a ward in Chicago, though much bigger than a ward.

The district compound is a series of small buildings, like a small university campus, some offices, some residences.  Leafy, low key, surrounded by the usual wall with three entrances, or gates.  Buildings look old, a bit decrepit, although probably built in the early 1980s. Qing says this area was pretty and clean and orderly when she was growing up.

Now, it is different.

Everything in Jingzhou is dirty, bad construction site dirty, all the time, everywhere.  Leaves on trees and bushes are covered with a film of greasy dirt.  You can see the green under the dirt, but it is not leafy green.  Some unfamiliar green.  What was built in 1985 has suffered from 40 years of no maintenance, at all. All of Jingzhou suffers from the tragedy of the commons problem - no one is the owner of public space, including buildings, so no one  takes care. But the district is the hub of local government.

Never let it be said that everything in China is better now than it was before.

At the district main entrance about 30 or 40 men and a few women were protesting. I asked Qing to get some details, and we talked to the leaders for a few minutes. They were protesting not being paid - for a year - on a construction project that has been taken over by the government.   The original developers of a wholesale shopping mall fled, the government took the project over, and promised to pay workers.   They are apparently owed several million yuan -  maybe ten million yuan - for themselves, their employees, and suppliers.  It was now close to New Year's, workers were going home, and they needed their promised wages. They had a cloth sign that blocked the exit for district government employees to leave in their cars.   They had been there for several days, they told us. 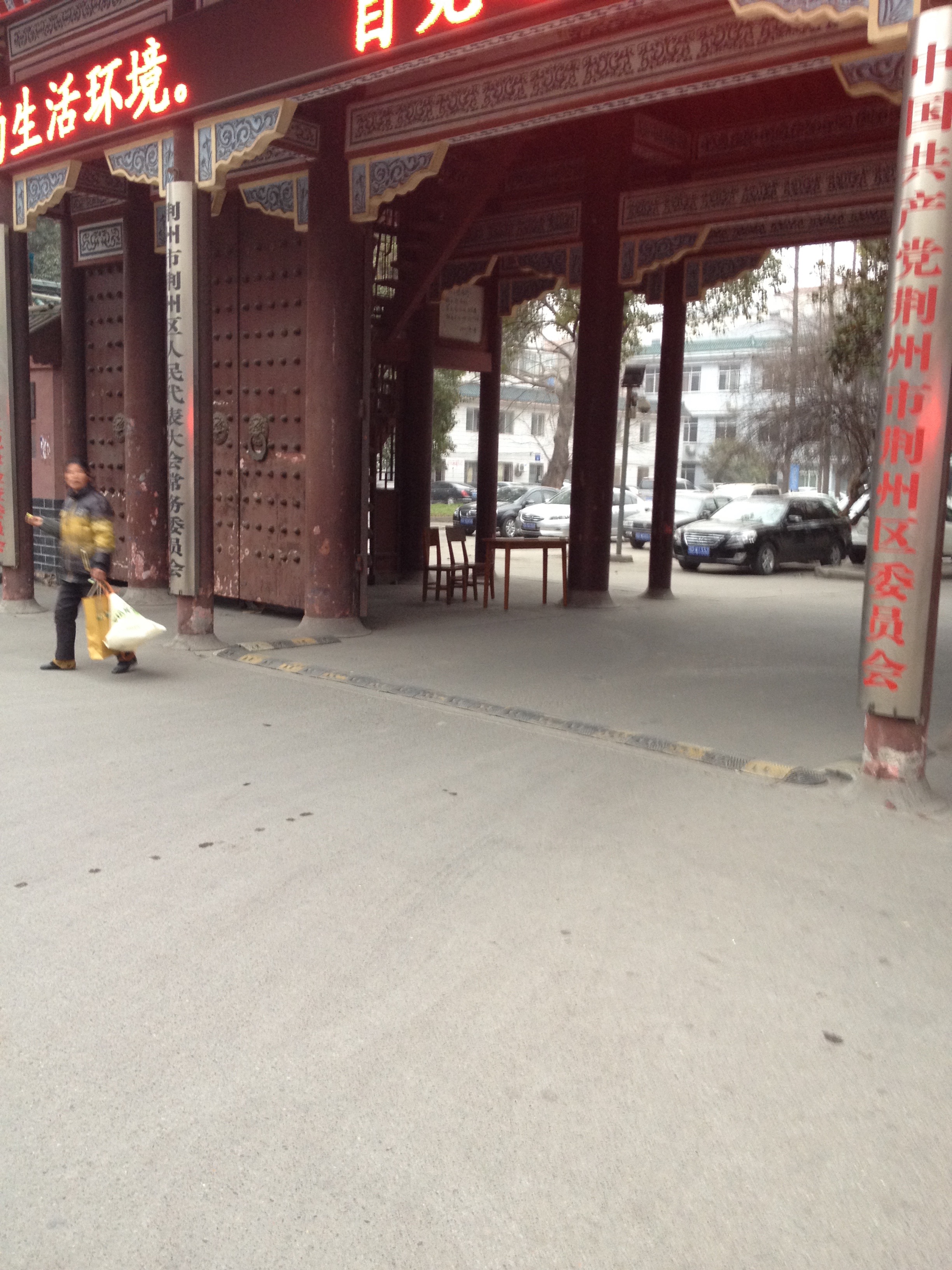 About 4:30 in the afternoon, the police showed up, two personnel vans, a few cars, some police in riot helmets with the pull down plastic visors and heavy vests with heavy guns, some not.   About thirty policemen to match the protesters.   Police stood around their cars, waited for a few minutes.

The leader walked up separately.  Chengguan is the term for the non-uniformed thugs employed - or let us say, arranged - by the government to break up protests, beat up old women and men, and occasionally murder protesters.   The leader was a thug in anybody's book.  Big, fleshy, jowly. Scowl. No uniform, just a pullover shirt and a light jacket.  Right out of casting, but this was not rehearsal.  Qing and Ben and I were standing right around the protesters and the police - this entire event was unfolding in the driveway in the picture, between the building entrance and the street, about 30 feet of sidewalk and parkway.  We were taking pictures. The thug threatened Qing, didn't know what to do with me.

Qing told the thug that if he wanted trouble, that was ok.  She said she was American.  She was not in a mood for cooperating.  Police wanted us to go away, but we were slow.  Qing said that my presence might have calmed the police a bit in their later action against the workers.   The thug shook his head first, as if telling his subordinates he had decided not to proceed as planned.  He then nodded, the police moved in, tore down the sign, pushed the protesters out of the way, to either side of the driveway.   They broke the protesters up into small groups, and surrounded them against the walls of the entrance. Pretty well organized, like they had done this before.  Very clear that any resistance would be met with overwhelming violence.

The protesters did not react much, at least not much compared with being physically shoved out of the way. The concept was to separate the protesters, and then the police formed a line on both sides of the driveway, so the government officials in their cars could leave on time at 4:30.

Some people standing around, watching, but most passers-by just kept passing by.  Either not news or not news they want to be a part of.

About half a dozen cars left the compound, moved into traffic.  The police hung around for about 20 minutes, gathered, got back in the vans, left.  No arrests this time, no bloodshed.  The protest was finished for the day. Qing said that the thug was not chengguan, but a representative of the central government security force, a somewhat secretive unit that exists in each city.   I did not know about them.   But the central government has a security presence even in the cities.   I have a couple of pictures, nothing juicy.   I will go back tomorrow, see if the protesters are there again.

My first protest in China.  Things you can learn by going out for a walk.  I knew that it was common for migrant workers to work for six months or a year and then not get paid, and there is little recourse. The blue roof shacks you see on all construction sites are the housing for the farmers who do the work, on projects big and small, and they live on the site, and usually get a little money for food, but they agree to get paid when the contractor or the developer gets paid, and so they work and exist on scraps for a year, waiting for the big payout at the end.  Often, the big payout never comes.  If the workers get half, or 25%, of what they are owed, that will be a good outcome.

The CCP says that China is in the beginning stages of socialism.  I guess that is true. The worker's paradise is not here, just yet.