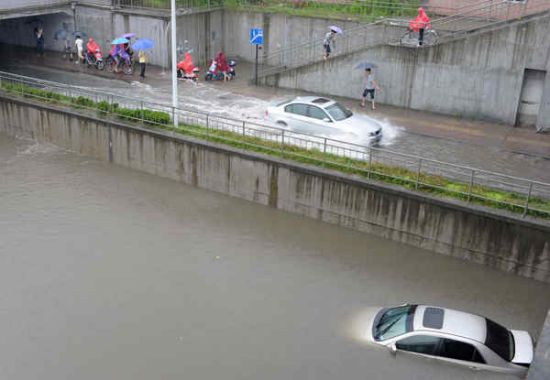 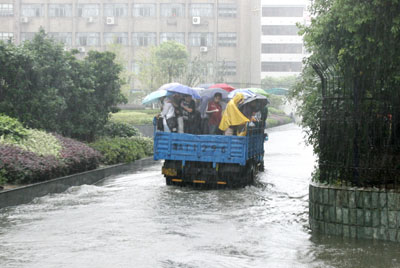 We have no school tomorrow morning, since the school felt that many teachers, who live just a few minutes away but have to travel liu he lu to get here, will not be able to make it. Maybe have school in the afternoon.  Contact everyone by wechat, and teachers should stand by, ready to respond.

Literally closer to home, we had some ceiling leaks coming from the apartment above.  We are on the fifth floor of a six-story walk-up.

So, lessons about real estate in China -  the apartment above is owned by a woman from Guangdong, in the south of China.  Currently, no one lives in the apartment above.   The owner will not decorate it - do the buildout - because it is not worth it to get the rent.  One reason why apartment construction is so much faster in China than in the US is that the work done by the developer is so much less – excavation, foundations, concrete block walls, plumbing risers with stubs into units, same for electricity, poured concrete floors, stairs, windows, exterior doors to apartments, c’est fini. At a point when an American developer would be about 50% complete with the project, the Chinese developer is walking away.  The apartment above us is left in its pristine original unfinished condition.

The owner above us rents the apartment out as is, bare concrete walls, sort of a makeshift squat toilet and tiny sink.   No kitchen at all.   No furniture, of course.  No lights, no gas.

She rents this apartment to students, and to construction workers (farmers) working on local projects.   The rent is clearly unstable, and the apartment has been vacant for a few months now.   When students were living there, the owner had divided the apartment with makeshift walls and doors into five or six separate units, each about 10 square meters, that student couples rented.   Sort of "starter" apartments for couples.  The students or workers run some bare wires, attach some light bulbs.  Take some plastic tubing, lay it on the floor, and that is water supply to a sort of kitchen and a bathroom.  Tape some plastic pipe to the concrete wall to get a shower effect in the bathroom.  You get the idea.  Not quite up to code.  But no problem in libertarian China.

With no one living there, the owner gave the key to the management company for our development that hires people to take care of landscaping, general cleaning, trash removal, and the guards.

It appears that people from the management company, or their contract workers, would use the apartment from time to time.  In any case, it appears that some of the windows above us were left open during the typhoon, hence the inch or two of water on the floor, hence our ceiling leaks.   Since the apartment above ours is the top floor, it is also distinctly possible that the leaks are coming from the roof, probably not the flat parts but from flashings or places where pipes go through the roof, maybe with little or inappropriate flashing.   There are also a couple of windows out in the unit upstairs, certainly a big source of water in a typhoon.

Whatever the source, the problems became evident yesterday morning, when the dining room ceiling began to leak.   Qing called the management company - three times - before someone came over to take a look.   First call - call answered, promise to send someone over, but no physical response; second call, not our problem, call the owner;  third call, this time a bit more insistent, then five people show up, with little dust-cleaning pans and brooms that one might use to sweep the kitchen floor. Very light duty if all one were doing is mopping the floor as part of a daily routine.  This was ceiling leaks in five or six places in our apartment. Chinese response -lots of labor, few or poor tools.

But sometimes throwing labor at a problem works.   In about an hour, they had the floor about as dry as it was going to get.   The leaks have stopped in our apartment.  We asked the management company to keep the door to the unit open, so we could inspect over the next couple of days.   They agreed.

Joking, I told Qing to call her insurance company.   There is no property insurance.   The owner of the apartment above does not have insurance either.   In these cases, as with the car accidents, the parties are supposed to meet and try to come to some settlement, on their own, without lawyers or police.   There is no concept whatsoever of government building or housing inspectors.

The bureaucratic response of the management company to Qing's phone calls is familiar.  Qing finally resorted to the "I pay you, you should do something"  approach, and that seemed to work.  In China, many of the people who own apartments do so at no out-of-pocket cost, other than the mortgage - there is no property tax, they carry no insurance, and they refuse to pay the small monthly management and maintenance fees.  There are apparently some abilities to get owners to pay the maintenance fees, but the measures are not used much, as I understand it.   Just too hard to go after people.   So property management companies tend to be underfunded - not only a Chinese complaint - without recourse.   Garbage gets picked up, guards function as guards, some cleaning is done - but anything else, apartment owners are at the mercy of whether their fellow owners have paid their dues, in addition to the usual bureaucratic delay.   It should go without saying that the budgetary processes are opaque.  It is not at all clear how to find out whether the property management company is getting money and not spending it, or just not collecting, or just using it elsewhere.

The owner of the apartment above will send over a friend, today, to have a look and discuss some settlement.   The friend, and Qing, will use their extensive construction expertise to decide on the costs of fixing our ceiling and remuneration for any problems that might show up next week.

Anyway, this is what I was thinking about while I watched women use dust pans to scoop up water that was otherwise going to be coming through our ceiling in a few minutes, if they did not move quickly.

So which is the more civilized - that the government regulations force behavior, with ability to sue and be sued, or that people should talk with each other, and discuss, and come to some agreement about a solution?   Are people born good, or not?  Do people learn goodness, or evil?  Does regulation remove moral responsibility?  We talk about this all the time in the US.

The key issue is power - tenants cannot turn on the heat in a central heating plant, and they don’t know a good roof from a bad one, a dangerous situation from a benign one.   When functioning well, the government serves to equalize power relations, which includes technical expertise.

And you see the enormity of the Chinese development model problem - I mean, with so many people, you expect capital to garner a large share of profits. Scarce capital is worth more, relatively.  But even now, how can so many people be kept so poor, even in the face of opportunities to make money and improve - fix buildings, test for quality, provide evaluation services?   The answer lies in both culture and organizations.  Chinese organizations work for the benefit of capital - it is illegal for a group of us to put money together and build a building, even in the face of enormous demand. It is illegal for us to organize to get better treatment.   It is difficult, if not impossible, to sue over poor conditions.

And Chinese do not want to trust a small company over a big one.   A big company has power, stemming from obvious relations with the government.   A small company has no relationships.    So the culture biases in favor of the big over the small.

And one more note on our leak problem -  four inches of concrete serves as a decent water barrier, in these conditions.   Socialist concrete construction works better in poor water conditions than American capitalist three inches of concrete on steel joists.   That is one reason why roof coverings are so poor in China - no one feels they need to maintain roofs, because the concrete does an ok job, except at joints, and any leaks are either the responsibility of the person suffering the problem, or are in common areas, which no one cares about.

And yes, on the scrutiny of consumer products - I have seen many people do that here, students from IIT and Qing and others.   They are looking for an indication of quality,  expiration dates, some hint that the product they are buying might be ok to use.   I saw this among IIT students, and Qing, in stores in China.  In the grocery store in the US, I grab a bottle of milk or bread from the shelf, and pay and walk out. Chinese pursue the fine print. Government regulation and culture.