You will all like this one, Rob particularly.   I am staying at the Moller Villa in Shanghai, which was a family home built by a Swedish/English shipping magnate in the 1930's for his daughter.  The story is that the daughter envisioned living in a fairy tale castle, and her father proceeded to comply with her wish.  The villa, interior and exterior, is phenomenal - beautiful brickwork and wonderful carved wood, like in some European... well, castle.  The villa was used in turn by both the Guomindang and the Gongchandang (Nationalists and Communists) after 1945 – no reason for leaders of any stripe to stint on luxurious surroundings.

Moller villa is now a small hotel.  The staff is even more than the usual Chinese attentive, almost obsequious.   I don't know whether to respond to the constant "Thank you for coming" and "Have a nice day" or just ignore them.  Am I encouraging them by responding or showing a western lack of respect by ignoring them?    Are they thinking about this as much as I am?

Breakfast is held in the dining room of this incredibly elegant villa.  The room is frightfully smart and polished, with tasteful amounts of marble (apparently, tasteful use of marble was once possible in China) and carved wood ceilings and moldings and inlaid parquet floors.    And the staff is the usual Chinese redundancy- there are four young girls in qipao(s? – no plural in Chinese, but this is pinyin … oy. complicated) at the front entrance to say hello and welcome and this way and good morning- I think each person has one assigned phrase, and that is their job. 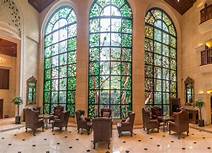 One could say the hotel is overstaffed.  When you ask for coffee, this is a two person delivery job.  Someone brings the coffee from the kitchen halfway to the table.  Not kidding.   It's not like they are carrying the coffee two hundred yards, and someone’s legs get tired.  But at the halfway point in the dining room, someone else takes the coffee off the tray of the first guy, and brings it all the way to the table, BY HIMSELF, and puts it down.  (Thankfully, there is someone else to attentively put the spoon facing the right way on the saucer, and adjust anything on the table that might have gotten out of place by the mere fact of my using it). 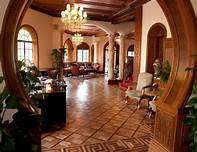 So one of the breakfast choices is an omelette, which is okay- green onions and red and green peppers and mushroom and maybe a little bacon- everything is cut up so fine they have obliterated the ability to distinguish meat from vegetable- and the omelette is delivered, via relay team from the kitchen, on a fine china plate, and set tastefully on the table.   The omelette is sitting on a drizzled dark red sauce, looking very sophisticated and proper, until you taste the sauce, expecting some exotic combination of flavors, only to discover that the drizzled sauce is.... ketchup.

Sometimes it is better to squint than to know all the details.

Update – In 1910, Eric Moller took over the Asian part of their family shipping business, later expanding to Shanghai.  By 1953, the company abandoned their mainland Chinese operations, and relocated to Hong Kong.

The villa is on every higher-end tourist site.  But the government travel site http://www.china.org.cn/travel/   contains an error.   From the web site -

In 2006, the hotel was ostensibly "closed for repairs" while in fact being used as the headquarters of a corruption investigation into Shanghai's top official, Party Secretary Chen Liangyu.  It was said that the fairyland villa turned into a nightmare for many corrupt officials who thought that they had been invited there for a "cup of coffee."  The villa hotel did not reopen to guests until April 2009.  http://www.china.org.cn/travel/travelogue/2009-05/20/content_17804418_2.htm

I stayed at Moller Villa in October of 2008, six months before the reopening, per the government web site. Maybe they didn’t see me as a guest, or maybe I was a decoy, or maybe the reservation, made for me by one of my government students, was itself a guanxi thing.  I didn’t see many other people staying there.   Didn’t see any officials looking nervous.  Anyway, reading this, the Chinese government will no doubt be happy to correct their error.