But this really was the Christmas Party.  There were two small fake green trees (Walgreen’s, about $6.99) about three feet tall, and bags of decorations that we used to decorate the trees.   There were about fifty Chinese students, and at the peak probably about twenty or twenty five foreigners, mostly Germans with a few Americans and Russians, and some kids from Zambia and Ghana.   I was surprised that not all the foreigners were there.  They missed a nice event.   Lots and lots of blown up balloons, and beer and juice and fruit, bananas and oranges and cantaloupe.   Everybody, of course, taking pictures.   Oh, yeah.  We all wore red Santa hats. 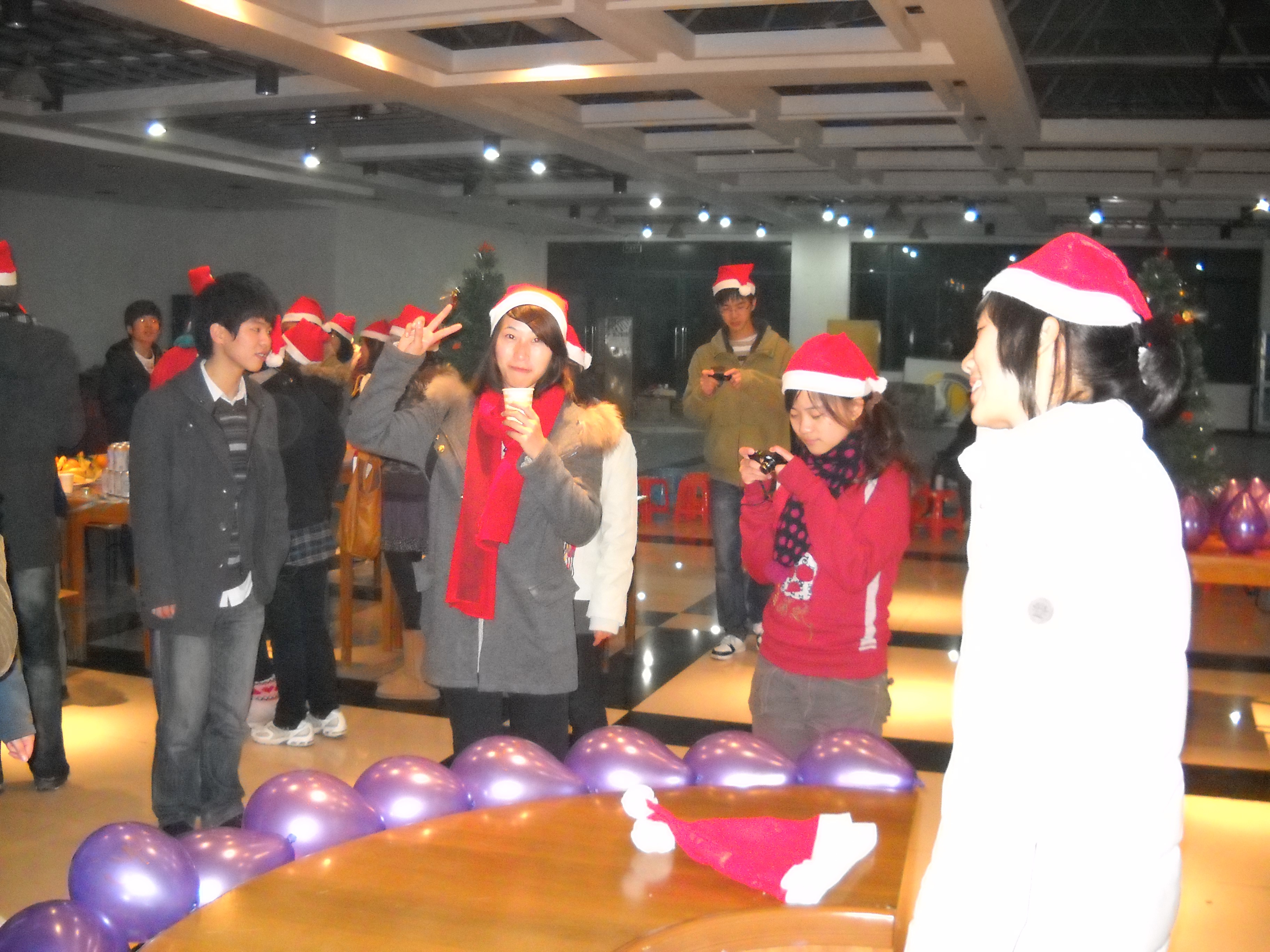 One of the students monitored the computer, with Christmas songs and other American sort of classic music (Edelweis is a song that every Chinese person knows, in English and Chinese, and probably also in German).

One of the students acted as the emcee, and she was good at getting everybody to jump in and get in the spirit of the evening.  The big deal, for me, was the games.   Chinese really do like to do things in groups, and they are expert at group party games that get everyone involved.   Our games were fun, a little tame,  but here is what we did.   Everybody got into groups of six, hugging.  On a signal, individuals in the groups had to re-form into  groups of seven.  Or nine.  Or five.   Anyone left out of a group, or any group that was unable to count, received – my favorite Chinese word- a punishment  cheng  fa.   Punishments, in this case, were all the same.   Losers had to sit down on a chair with a blown up balloon on the seat, and the balloon would break, and everybody would laugh or giggle.  And the game would go on.

Next game was a couples contest thing, but randomly selected couples.   One of each pair had a cardboard Santa mask covering the face, and was given a stick, sort of a walking stick, but thinner and lighter.   Each couple stood side by side,  their inner legs taped together so they had to move in unison.   Everybody else gathered around the two couples, with dozens of balloons on the ground in the middle of the circle.  The concept was for the seeing member of the couple to direct the other, with the mask and the stick, to break balloons.   Whichever couple broke the most,  in the time allowed, got off without a punishment.   The losing couple had to do something, dance, hop on one foot, sing.   Each member of the losing couple drew their punishment from folded pieces of paper in a jar.   One guy had to kiss the girl, which in any sort of normal universe should not have been a problem.  Among Chinese college freshmen and sophomores, this was almost like having to get past girl cooties to get the guy to do it.   Everybody was giggling and embarrassed, and the girl ran away before she was induced to come back.   The guy, the goof, finally kissed her keeping the piece of paper between their lips.   How in the world did this country end up with 1.3 billion people?   Some punishment. 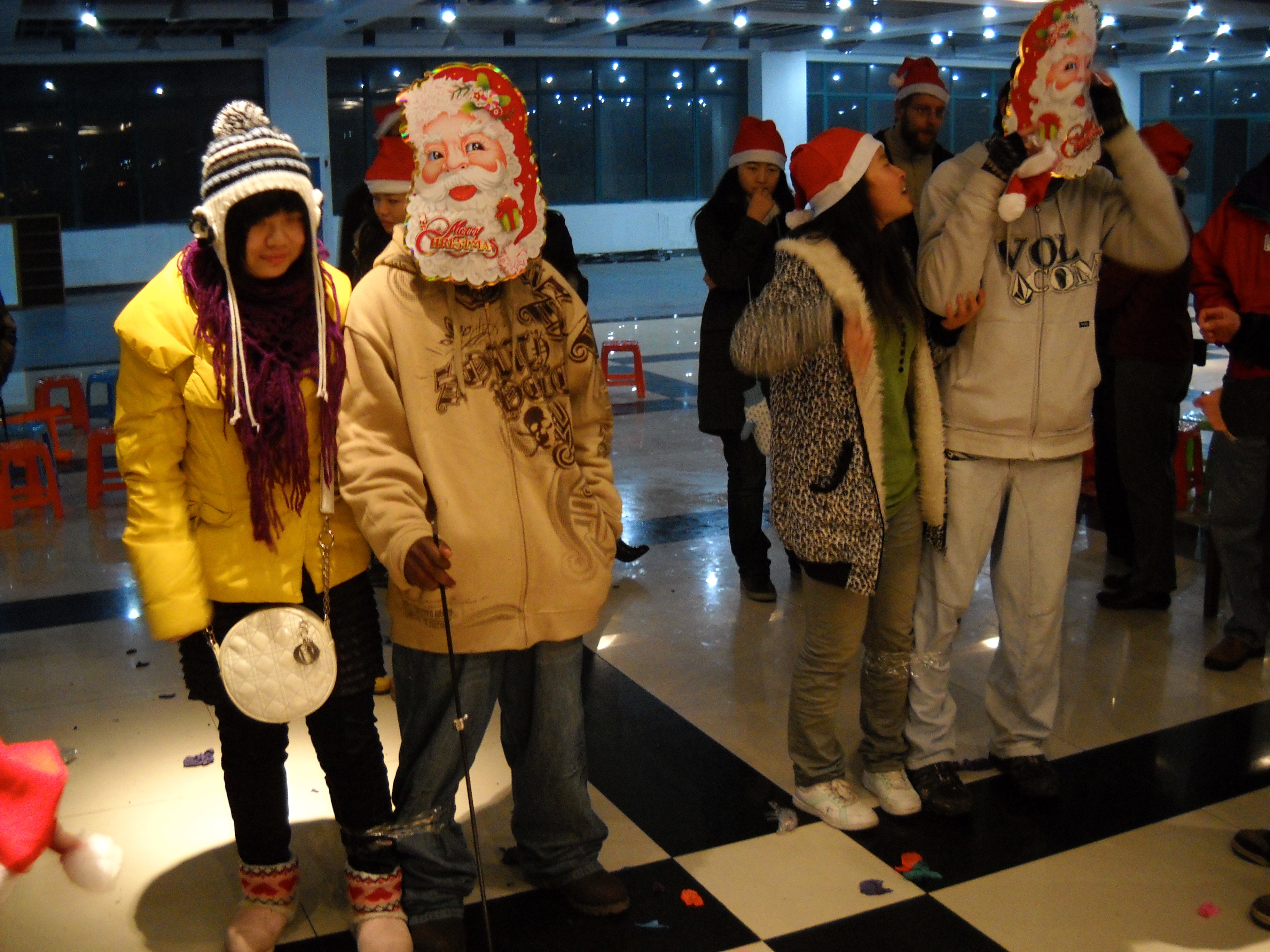 Next game was a pass the water in the Dixie cup game.  Two teams, about eight to ten people on a team, everybody puts a Dixie cup (ok, probably not a Dixie cup.  A southern China, cup, then.)   between their lips, with the bottom ridge of the cup between their lips.  Concept is to pour water from person to person,  one cup to another, no hands, obviously, without spilling much.  Winning group was the one with the most water in the bucket at the end.   Losers, of course, received a punishment.

These are just three examples.  There are plenty of other games I have seen, ways to create a fun evening for small groups of twenty or fifty, without spending money, as tame or as risqué as you wish, and as part of the punishments people have to use their skills in singing, dancing, doing pantomime, or memorizing numbers or passages.   Everybody participates, everybody has a good time, and it beats the hell out of sitting around drinking and watching tv.  Fun in groups. Everybody learns to sing, and dance, or do something.  If for no other reason, it is punishment.