Details
Bill Markle
Comments on Policies and Programs
24 May 2020

What do you think of western civilization?

The question to Gandhi is now being asked again, this time by educated, sophisticated Chinese of each other.

This was the topic of a four-hour phone call a few nights ago between Chinese PhDs, both with extensive American experience and important midlevel career positions.

In a word, their conclusion was the same as Gandhi’s – it would be a good idea.

Their argument below is depressing, as if you need any more of that. I am paraphrasing in spots and retelling in what follows.  My own Chinese language skills couldn’t have kept up.

For my colleagues and for many educated Chinese, the US and the west have been the model of civilization - educated, smart, democratic, highest technology and culture, in a word, modern. Human rights were honored, even if not always observed in the breach. This, coming from Chinese who know that historically, Zhongguo was always considered the center of the universe.

That the west was the center of modernity was an idea nurtured over a long span of time, probably going back to the era of treaty ports in the mid-nineteenth century.  Out of the humiliation of the 19th century came the May 4th movement, which sought to replace millennia of deference to authority and superstition with “Dr. Science and Mr. Democracy.”

Ancient Chinese culture was … well, ancient and feudal.  Chen Duxiu, founder of the Chinese Communist Party, saw modernism and personal independence as the conditions necessary for growth.  This was in 1916.

The US remained the modernist pole star for the next hundred years.  The term for the United States, meiguo, means beautiful country. But by 2010, many Chinese believed in the American dream and an American miracle more than did many educated, sophisticated Americans.  Chinese were not ignorant of American deficiencies – racism, poor schools and health care for poor people, a developing oligarchy, gun nuts and chaotic politics – but democratic values seemed able to pull victory from the claws of every looming defeat, and all that was necessary was a little money to get world class schools, education, health care, and a peaceful life. John Dewey had been a popular figure in China, and above all, America was seen as pragmatic.

That was then, this is now

That was the image, and it is no more, my colleagues said in the wechat call.  America has been the standard, but they also considered western Europe, and found it wanting as well. America – and the west – seem in thrall to an ideology, not one my interlocutors could identify, but it was definitely not pragmatic.

This democracy thing – perhaps more precisely, individualism - has met its match.  The covid-19 virus is only the latest and most clearly defining symptom.  Democracies, they said, seem unable to do basic things that improve the lives of most people.  A hundred thousand dead is an acceptable level of loss?  Policies that pit states against one another to obtain PPE? The interlocutors on the phone call couldn’t get to evolving deficiencies in laws, regulations and institutions that were the subject of Why Nations Fail (Acemoglu and Robinson).  Nor had they read How Democracies Die (Levitsky and Ziblatt).  The sense was the American promise was now – well, if not a lie, at least more marketing than substance.

I have many Chinese government friends and associates, some of whom have made moves to purchase real estate in the US for retirement or for their kids to go to school here, or just in case.  Those days seem over, and not only because of the egomania of the leaders Xi and Trump.  The America that was promised is now an uncertain risk.  Who knows what part might fail next?  Metaphorically, the American car used to be new and shiny and had the latest gadgets.  It was safe, everything worked, and the warranty was sound. Now the American car is a used car, and if you look under the hood, it gets pretty scary.  The warranty is barely worth the Constitution it is printed on.

This jaded view of the US and the west is not new.  Chinese university students in America have been coming home to China for a decade, unimpressed by the lure of freedom of speech and democracy that comes at the cost of guns and mayhem and ridiculous health care expense.  Now world news and opinion is flush with incredulity and alarm about the US.

There is little sense of individual responsibility and little concern for the other, said my colleagues.  Freedom to die is apparently the mantra for those now rushing to bars without masks or distancing.  Chinese would say, good luck to them.  And, they say, the Cortland County New York wallet card should be made mandatory in Wisconsin, Georgia, Florida – anywhere the stupid people congregate. 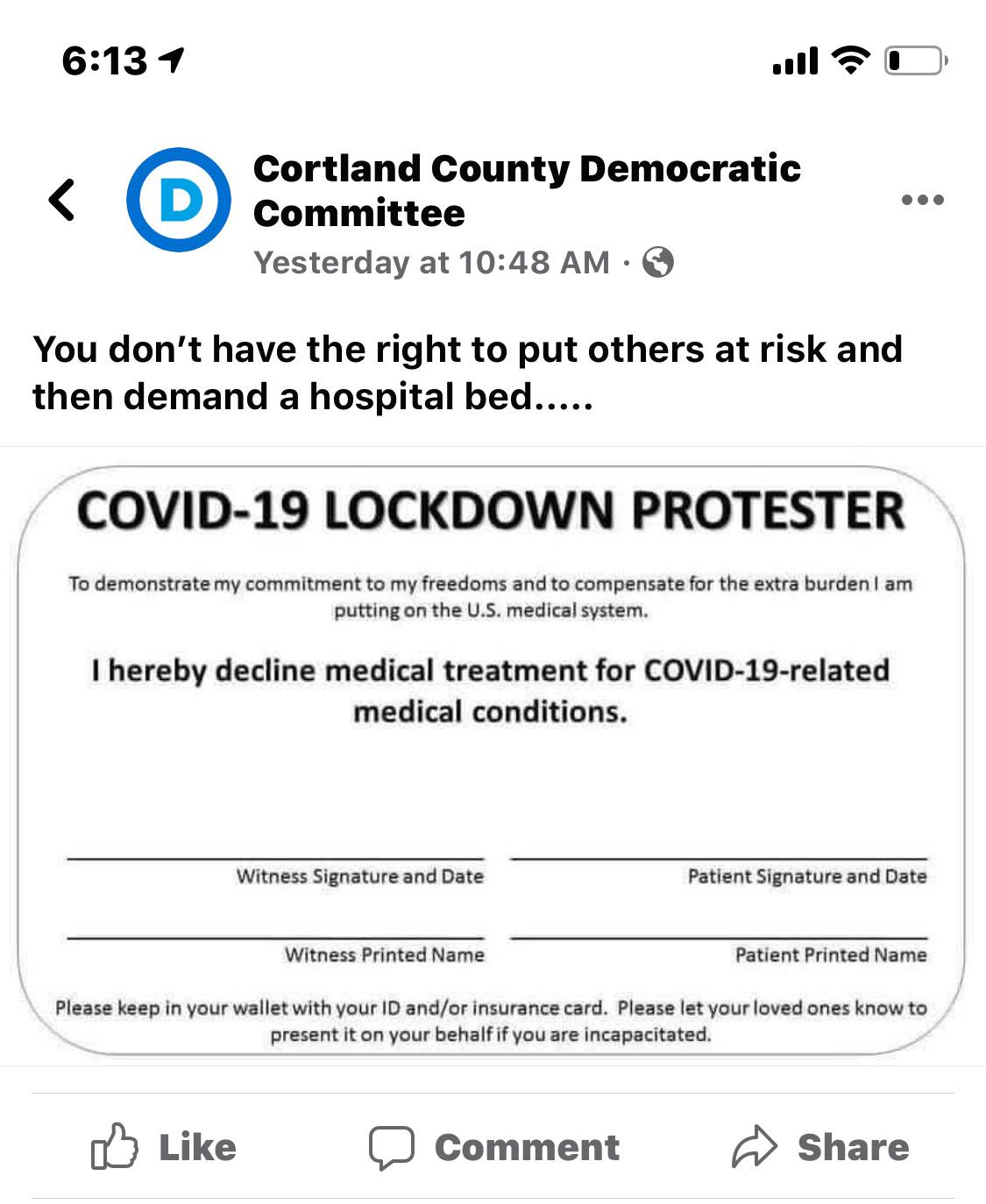 The comparisons with China are easy and superficial, and my colleagues were speaking only in personal, offhand remarks. Their feelings about the Chinese government in January and February were very negative. Now, looking at the rest of the world, they have a different idea. China bungled badly in the first six weeks or so of the virus time, but with testing and lockdown, distancing and quarantine and tracing, it basically beat the virus in two months.

There was no expressway driving allowed.  If people were infected, they were isolated away from their families.  Temperatures were taken going in and out of residential complexes.  People’s level of cooperation was very high.  It didn’t matter if you were young or old, rich or poor, lives were treated as more important than the economy.  Now that cases have shown up again in Wuhan, the plan is to test all 11,000,000 residents in the next couple of weeks.  We can discount real implementation of that plan as fanciful, but nevertheless, the government will test and isolate and trace, and that will work.  Individuals bear no cost for treatment of Covid-19, from testing to ventilator. There is no point in staying away from the hospital if you are sick because you can’t afford it.  All things considered, including that the virus started there, they said, China had about the best possible response.

One can quibble.  This was their considered evaluation.

In the US – well, you know the news stories.  The rate of new daily cases has still not fallen in two months, to May 23. And that was with two-months notice before shutdowns began. On the phone call, my Chinese friends were appalled at the ignorance and sheer stupidity.  The Michigan legislature shut down rather than confront gun wielding freedom-to-die fighters who deny medical expertise. If I don’t wear a mask, and I infect you, so what?  Leaders tell old people to die for the sake of the economy, and everyone should drink bleach. Neither Dr. Science nor Mr. Democracy are in evidence. Who are these people?  Left unsaid, I think, was the question of whether these can be real humans at all, but there certainly was a sense of the inmates running the asylum. Over the next few months, will we really accept 2000 deaths a week as the cost of doing business?  Is this what human rights comes to?

My colleagues used Marx for reference.  The first stage of capitalism was certainly ugly.  Marx said that every pore on the skin of the workingman was filled with blood or dirt.  But wealth bought respectability and human rights talk, and this worked pretty well until the real control and desires of the capitalist class were exposed in 2020. The political leaders and a lot of citizens are in thrall to the economic oligarchs.

A story about a woman named Peggy Popham from North Carolina summarizes the views of my colleagues that a good portion of Americans are just … well, nuts – The coronavirus pandemic created the perfect environment for apocalyptic Christianity to fuse with antigovernment libertarianism, New Age rejection of mainstream science and medicine, and internet-fueled gullibility toward baroque conspiracy theories about secret cabals ruling the world through viruses.  About twenty percent of Americans have said they would not take a vaccine when available.

The rejection of science and rationality, they said, means the US can no longer be considered modern. Other Chinese agree. In a recent article, Wu Haiyun, editor at Sixth Tone, echoed the feelings expressed on the phone call, but she was referring to Chinese now in their late thirties and early forties - Trust in Science Saved China. Practicing It Will Keep It Safe.

This Chinese view is not itself isolated

Edward Luce at Financial Times writes about the world’s view of America now, and it is not pretty -  William Burns, most senior US diplomat and now head of the Carnegie Endowment - America is first in the world in deaths, first in the world in infections and we stand out as an emblem of global incompetence. The damage to America’s influence and reputation will be very hard to undo.

The Guardian suggests that the world looks on in horror at the US response.

And Fintan O’Toole writes in the Irish Times - Over more than two centuries, the United States has stirred a very wide range of feelings in the rest of the world: love and hatred, fear and hope, envy and contempt, awe and anger. But there is one emotion that has never been directed towards the US until now: pity.

Another colleague of mine whose tax clients are mostly foreign nationals remarked that part of what he had done for forty years was enable people to live, work, or make a living in the US.  Now, he says, he is dealing with the converse – people wanting to move assets or themselves out.

What is to be done?

Now, if you have choices about where to live in the world, where to go? If you have kids, what is a safe and humane place with expectations of solid education in which to bring them up?  Where will a kid be more easily cultivated as a right-valued person?  The virus seems the last straw.

For my colleagues, this democracy thing has come to mean not that citizens are empowered to obtain information and make educated choices, but that “my ignorance is just as good as your expertise” and more to the point, “every man for himself.”  No democratic founder in Athens, the Colonies, or political philosophy in any era would support that view.

This is what the American image has come to.  Evaporation of American soft power cannot be far behind. The vaunted American Dream has become a version of Is that all there is? Robert Frost considered whether the world would end in fire or in ice.  Neither, it turns out.  The world as we know it ends in willful ignorance and stupidity.  The scientist, the doctor, the researcher, the humane and rational end up looking like navigators on Plato's Ship of Fools. “Fake news,” is what my Chinese colleagues said about this alarming American discrediting of science – but they meant that people could not distinguish science from lunacy.  Good luck to those Americans, is what they said at the end.