Public Morality  - not our finest hour

We come to public morality.

Learned Hand  “The Spirit of Liberty” speech at “I Am an American Day” ceremony, Central Park, New York City (21 May 1944)

So, too, for the spirit of public morality.  Confucians have the so-called Silver Rule – do not do unto others what you would not have done unto yourself.  In another virtue ethic, Christians have the so-called Golden Rule – do unto others …. Neither maxim is about truth.  Both are about the process of finding truth and peace.  Liberty means that we, together, will find the way, the Dao, in living together.  Morality has the same prescription – it must be sought, and found, together.  Otherwise, the ideologue, the dictator, the emperor for life will tell us all what is the truth for us all.

What is turn the other cheek?  If not masochistic, then it must be a warning that the other side see the world differently.  What is “there but for the grace of God, go I?”  Recognition that we are all human, and all different.

Morality in governance in China now

This is  not the place to review the assault on human values coming out of CCP.  Everyone knows small pieces of the history.  No one has ever accused CCP of sacrificing instrumental values – power, money, control – for a Confucian sense of morality.  But CCP is wanting to use Confucius, and a Confucian sense of morality, to support its model of governance in China.  So, a couple of comments -

Morality per Confucius (Analects XV.23) means a sense of reciprocity, of humaneness. The silver rule – “do not do unto others what you would not have them do unto you” – is hardly a CCP byword.  The tools of morality, the way of constructing a moral life – compassion, fairness, reciprocity, the golden rule – are not to be found.  The leader, according to Confucius in Analects 2.1, should be like a “north pole star” modeling virtue for all the people. In the case of Mr. Xi, his family has accumulated wealth of over $1 billion. This fortune, accumulated in mysterious ways, should disqualify him from a position of leadership in Confucian terms, per Mencius, regardless of his attempts to purify the CCP of corruption.  There cannot be clarity of purpose to serve the people, or virtuous modeling with such a family history.  And the exemplary leader should not be idolized – humility is the proper form of presentment.  But Xi has encouraged idolization

Xi has party working to build nationwide fan base 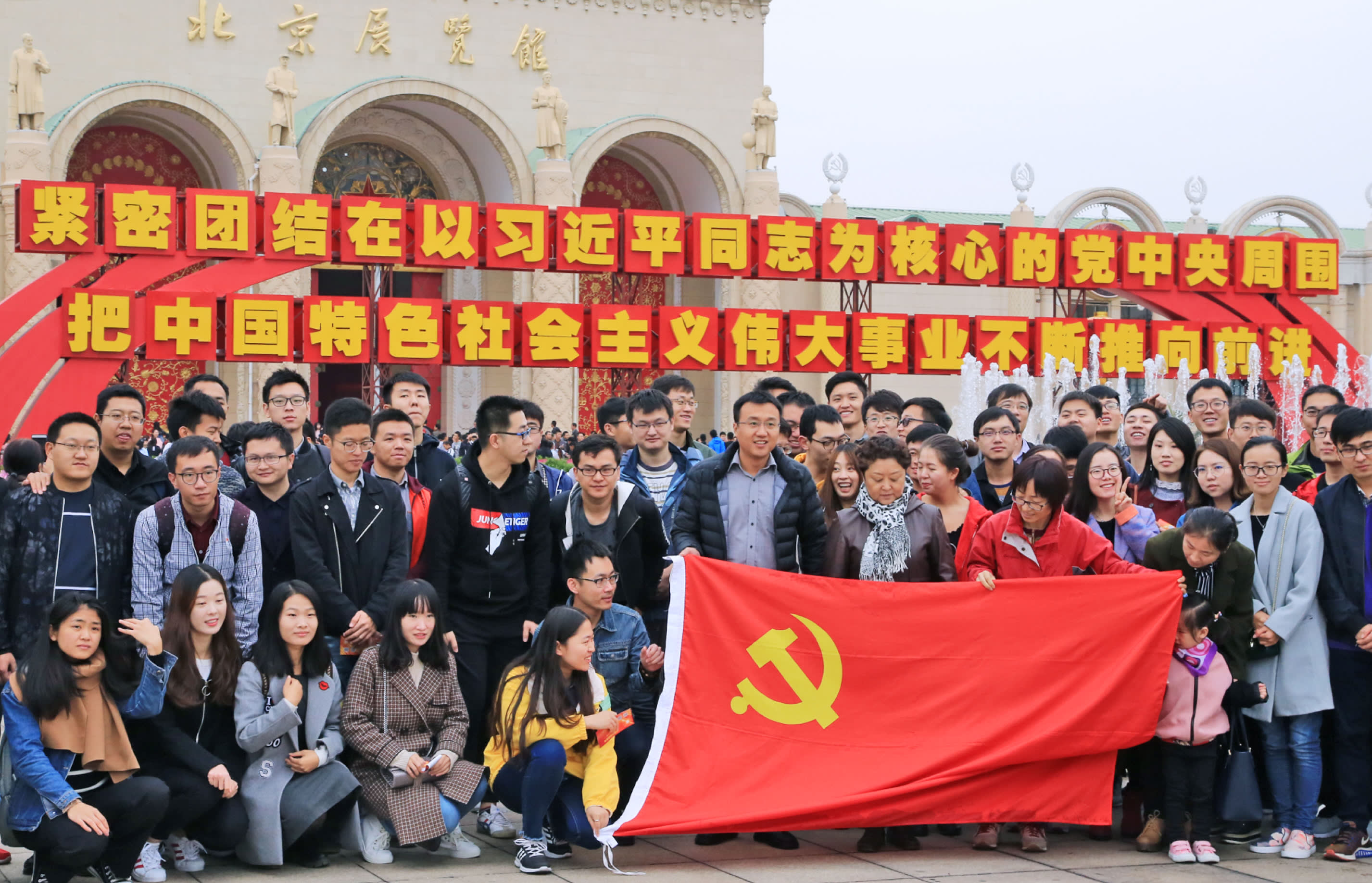 with songs, paintings, books, school projects, all ascribed to Xi and his wisdom.  Takashi Kawakami in Nikkei Asian Review - Visitors were recently observed at the venue taking photos in front of a party flag as well as a signboard bearing a slogan that mentions Xi. Roughly translated, the slogan reads: "Let's join forces with the party central committee, with comrade Xi Jinping at its core, and advance the great socialist cause that characterizes China."

Not since Mao has a leader been so venerated, and we know how that worked out.  Veneration of leaders has in fact been outlawed by the Party since the Mao era.  My inlaws have a calendar with Mr. Xi and his wife on the picture, waving to the observer, offering hope to all.  But it is a bit too much like the same calendar one used to find in America, with Mr. Xi replaced by either Jesus or the Pope.  No halo or papal mantum on Xi, though.   Xi has written – or put his name to – books advising Chinese how to understand Confucius and other classical Chinese thinkers.  (Available here – $28, English, as advertised, in time for Christmas)  But he forgets a critical passage from Mencius -  The people are the most important element in a nation; the spirits of the land and grain are the next; the sovereign is the least.

Sam Crane assesses the Confucian morality of Mr. Xi in a Los Angeles Review of Books piece from 2017 - Philosopher King   Crane points out that the true Confucian leader is open to change –

rather than hyper-centralized power that intimidates dissenting opinion, Confucius himself stresses the need for sufficient political openness to keep critical information flowing. When asked, in Analects 13.15, if there were one precept that might ruin a country, he points out that it could be disastrous if no one dare defy the ruler because a truly virtuous government rests on honest critique. Xi also does not discuss this passage in his book.

The assault on human freedom and dignity in Xinjiang is Mr. Xi’s doing.  The assault in Tibet is as old as CCP, but continues.  The monitoring of ideological purity among Chinese students and business people outside China is an assault on human dignity; so is kidnapping of Canadians as tit-for-tat in the Huawei crisis.  Intimidation of foreign scholars, in China and outside, by way of silencing them, is another.  See Christopher Balding here and here and  Threats to Anne-Marie Brady.

Everyone wishes the Chinese people well.  Their story – not only in the last forty years – is a remarkable one.  But the leadership is without moral foundation, interested only in what preserves power, and is unable to put on a different face for very long in dealing with the foreigners.  Now the debt problems and currency restrictions, jack-booted terrorism of Chinese people, and hubris are showing the world, in Warren Buffet’s terms, who is swimming naked. As with economic crises, the political crisis can take longer to manifest than one thought, and then unfold faster than anyone imagined.

Morality in governance in the US now

Meanwhile, Trump is nearly the poster child for public immorality. In Confucian terms, our current dear leader is not only not humane, he is grossly unqualified to be a leader and, one can argue, not quite fully human – humanity, the art of being humane, being a developmental process that in his case has clearly fallen short of completion.  Sam Crane assesses Mr. Trump at Mencius says Donald Trump in inhumane.

For those of you who want a quick summary of the Confucian perspective on Trump as leader and as responsible man, consider -

"Is it not his absolute sincerity which distinguishes a superior man?" (Doctrine of the Mean, c. xiii., 4.)  Chinese Text Project

"What the superior man requires is that in what he says there may be nothing inaccurate." (Analects, bk. xiii., c. iii., v. 7.)

"The superior man is anxious lest he should not get truth; he is not anxious lest poverty come upon him." (Analects, bk. xv., c. xxxi.)

"I have heard that the superior man helps the distressed, but he does not add to the wealth of the rich." (Analects, book. vi., c. iii., v. 2.) Chinese Text Project

Perhaps I should send these Confucian quotes to Mr. Xi and Mr. Trump for their consideration.  No doubt that will promote change. Sacred Texts - The Ethics of Confucius - What Constitutes the Superior Man

In any case, at some point both leaders will be forced into retirement, and the history writing will begin in earnest.  Mencius –

In their retirement, one only hopes that both leaders begin to reap what they have sown, and lose the trumped-up status their egos have turned into the crises of our time.  For each of them, loss of status, loss of face, perhaps loss of fabulous wealth might be sufficient for them to finally have some personal experience of the words of Brutus - sic semper tyrannis – ever thus to tyrants. Not to wish them personal harm, but to gain the humility that Confucian and Christian ethics demands.  In these things of grandiosity and hubris, the two leaders are not dissimilar at all.