My wife is in the other room right now, crying. She has been reading Wuhan stories, those that get through before they are blocked.

Even now, with the panopticon state nearly complete, some individual wechat messages do get through for a while.  The stories are too long to relay here. I can only give you a sense of the despair – doctors, nurses, people of Wuhan.

It is The Plague (1).  People lined up at hospitals by the hundreds, carrying their x-rays with them, hoping against hope for someone to see them.  In most cases, people will not leave the hospital, or their place in line, so they sleep – without food, without shelter – on the floors, outside, anywhere that preserves their intention to see a doctor.  People dying on the floors untreated because there are no beds, no medicines, doctors cannot leave hospitals, people traveling - now by foot or bike, since buses are shut down - to five or six hospitals hoping someone will do the final checking that will allow them to be treated.  People who are seen by a doctor and deemed not sick enough yet are sent away.  There are certainly hundreds of those patients.  At least some deaths are not reported as virus related. Masks and hazardous treatment clothing are in short supply.  Some other provinces have sent teams of doctors to Wuhan, but it is not nearly enough.

The government in Wuhan comes in for special hate.  The provincial governor told everyone two days ago - after the quarantine was instituted - that all is well, don’t worry.  In his annual New Year’s speech to residents, the Hubei Party leader made no mention of the coronavirus at all. As of Wednesday, the 22nd, the first mention of the virus in People’s Daily was a small item on page 4.  The first two pages of the paper were all about Xi’s trip to Yunnan.    Mr. Xi’s New Year’s Message, reported from Xinhua, made no reference to Wuhan at all. 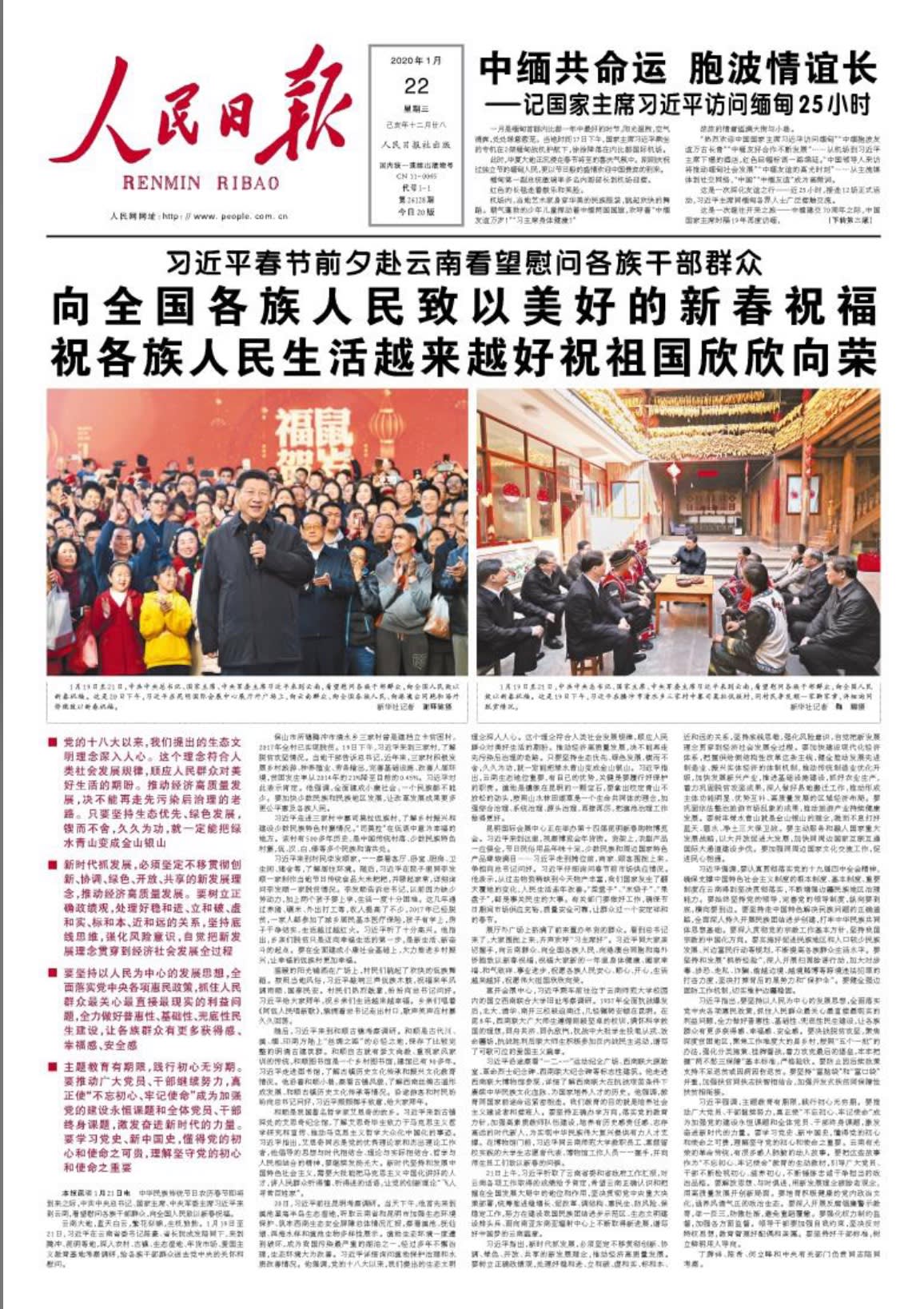 No hospital is permitted to make announcements about contagious diseases – all such announcements have to come from the government.  The crisis leader is an 87-year old doctor who led the SARS crisis treatment (2).  Only when he announced that the virus could be transmitted from person to person did the government agree.

All public forms of transportation are shut down to Wuhan and now ten other cities in Hubei.  No intra- or inter-city buses. No air traffic or expressway traffic.  If your license plate has a Wuhan letter indicator, you cannot cross the border on the expressway without special permission. The only way to get around inside Wuhan is to walk, bike, drive, or take a taxi.  You know how many people don’t have cars.  People are significantly weakened by fever and lungs filling up with virus.  People have to make choices between staying with a sick parent in line or on the floor at the hospital for dozens of hours and taking care of their own children at home.  Hospitals have been told to report zero infections among staff, so doctors and nurses who might be infected are not reported.

I haven't heard this yet, but since the whole city is shut down, there will be food shortages in a day or two.  Supplies will certainly be allowed in, but not likely in sufficient supply.

Doctors at hospitals in Wuhan said they expect the total number of infected to be more than 6000.  My own personal guess is that is a low number, based on nothing more than the severity of the foreign reporting, the paucity of Chinese government reporting, and the anguished stories on wechat. Doctors are reporting that some of those infected do not show any fever, so using temperature as a diagnostic is not completely effective, and the incubation period for the virus could be up to two weeks. Today, Friday, January 24, at the moment of writing, there were 900 officially reported cases, an unknown number of unreported cases, and reports are that the virus tripled over last weekend and has spread to 32 of 34 provinces. The Wuhan lockdown is unlikely to be effective, first of all because a lockdown of a huge area of 11,000,000 people has never been tried before, and the window for controlling spread of the virus had already closed before the lockdown was announced on Wednesday.  Not to mention the number of cases officially not reported.

Thursday, January 23, central government mouthpiece People’s Daily sent out a cheery message.  The Chinese people are united in their support for Wuhan.  This is unspeakable.

Wuhan, hang in there! You have the support of all people across the country. The more difficult the situation is, the more united the Chinese people are. This has been constantly proven by both history and reality.

No one trusts the government, among other problems.  When you have a single source of authority, of power, no one can act on local knowledge to do better.  That is what Hayek said in The Road to Serfdom and James Scott said in Seeing Like a State: How Certain Schemes to Improve the Human Condition Have Failed.   Scott calls this a failure of high modernism, and Chinese governance most certainly is an example of that in every aspect.  Engineering efficiency demands that nothing stand in the way of official action.  But official action does not respond quickly to local knowledge (3)  Combine with a hierarchical government system in which bad news does not want to flow up the chain of command, there is extreme media censorship, and you have the sort of place over which that motto might fit well – abandon all hope.

China’s cabinet-level National Health Commission said Monday it would treat the new coronavirus as a Class A infectious disease, meaning it would be handled similarly to cholera, the plague and to how it handled the SARS outbreak. Both SARS and the new virus are officially categorized in the more benign Class B.

A prominent virologist who helped identify the source of the deadly SARS coronavirus nearly two decades ago told Caixin that Wuhan’s spike in new cases “shows that the (new) virus can spread from person to person.” Guan Yi, who heads a laboratory for emerging infectious diseases at Hong Kong University’s School of Public Health, said that while the virus had seemingly not initially passed between people, the rise in cases over the past several weeks meant “we should no longer be playing word games about whether or not this constitutes human-to-human transmission.”

“… Actually it only takes a short while to get virus results in local hospitals with the test kits. What is time-consuming is that suspected cases are required to wait for a second positive result from the Chinese Centre for Disease Control and Prevention [in Beijing] before a panel of experts can go ahead with clinical diagnosis. Only after these three steps are completed can we publicly declare any confirmed case,” the official said.

Well done!  One of the early cases was dated January 3.  His viral status was not announced until the 19th.  Most people at hospitals are turned away or simply leave without seeing a doctor at all.