From the NYT article -

On some mornings, Dr. Huang Dazhi, a general practitioner in Shanghai, rides his motorbike to a nursing home, where he treats about 40 patients a week. During lunchtime, he sprints back to his clinic to stock up on their medication and then heads back to the nursing home.  Afterward, he makes house calls to three or four people. On other days, he goes to his clinic, where he sees about 70 patients. At night, he doles out advice about high-blood-pressure medications and colds to his patients, who call him on his mobile phone.  For all this, Dr. Huang is paid about $1,340 a month — roughly the same he was making starting out as a specialist in internal medicine 12 years ago.

Doctors so poorly paid must find other ways to make money, and writing prescriptions is a principal means.  Doctors receive kickbacks from suppliers as a way to supplement income.  This is illegal, but without complete reform of the system, there is no way to end the practice.  The incentives are too great on all sides of the issue - suppliers, doctors, nurses, even patients.  The government has said it would crack down on the practice, but to little avail.  The government did fine GlaxoSmithKlein $500 million in 2014 for paying bribes to doctors and others.  Chinese pharma companies were noticeably absent from any prosecution in this regard.  NYT GlaxoSmithKlein fine  or if you do not have a NYT subscription, BBC GlaxoSmithKlein fine.  From my own experience in China, the system remains unchanged.

Chinese have little respect for the medical system, and doctors are at the receiving end of patient anger.  It is common to read of doctors assaulted, even killed, by enraged patients, parents, or siblings.

In this file photo, hospital staff walk past a security guard on duty in a hallway at the Beijing Friendship Hospital during a government supervised media tour on February 29, 2012.   ED JONES—;AFP/Getty Images
A few more references -

But overprescribed - and overly expensive - medications, battlefield conditions of treatment, and lack of training are an affront to even middle class Chinese who see excellent care for some, and a completely ignorant system otherwise.  As I mentioned in other pieces, it is frustrating to know that better treatment exists, and you cannot have it because someone else - maybe the woman who walked in after you - has superior guanxi.  When patient outcomes are less than desired, the frustration can boil over.

Picking out a doctor to treat you, like picking a train back to the suburbs from downtown at 5:10 - 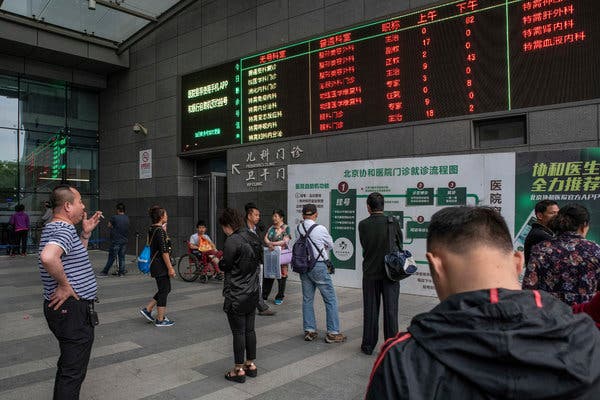 An electronic board at the entrance of Peking Union Hospital displays the number of doctors available and their specialty.  CreditGilles Sabrié for The New York Times

My own minor experience - when we were seeking to book a room - like in a hotel - at the Pregnant Women's Hospital in Hangzhou, we were kept waiting outside a locked door on the patient floor for more than half an hour, while events unfolded inside. I knocked on the door several times, the guard at the door saw me, and simply ignored us.  The guard controlled access, and others were let in ahead of us.  My own frustration, boiling over, was relieved when I bolted through the door as another women was let in ahead of us.  At that point, there I stood, alone inside, with my wife and sister-in-law and a bunch of agape Chinese outside.   But, fait accompli - I was inside, I was a foreigner, and the only reasonable solution was to let the rest of my party into the floor so we could - check out the VIP room, as arranged previously, the room we were paying for.

Oh - another personal experience -when our son was born, some medicine was handed to my sister-in-law, sleeping in the room with my wife and new born son.  She was instructed to put this medicine in my son's eyes a couple of times a day.  (Nurses don't administer medicine).  No suggestion that something was wrong, no discussion of adding this to Ben's post natal care.  What was the medicine for?  I was not going to have someone put stuff in my kid's eyes without knowing what it was for.  No one - not any of the nurses, not the head nurse - had an answer.  The medicine was prescribed by my wife's doctor for our son.  Un-huh.  I declined, and told the nurse to take it away if she couldn't provide a reason for its application.  "Oh, no, the package is already opened.  You must take it."  (meaning, you must pay for it.)  Again I declined.  Much discussion and phone calls followed, which I am quite sure only took place because I was a foreigner.  Finally, a resolution to the impasse.  The hospital found another new mom who did not - or could not or would not - object to application of the medicine for her baby, even from an opened box.  We were relieved of responsibility.  No doubt the hospital gave the other new mom a discount on the meds that she never authorized or was told about.   But the system persevered - the system of mystery and control - and the system emerged victorious.