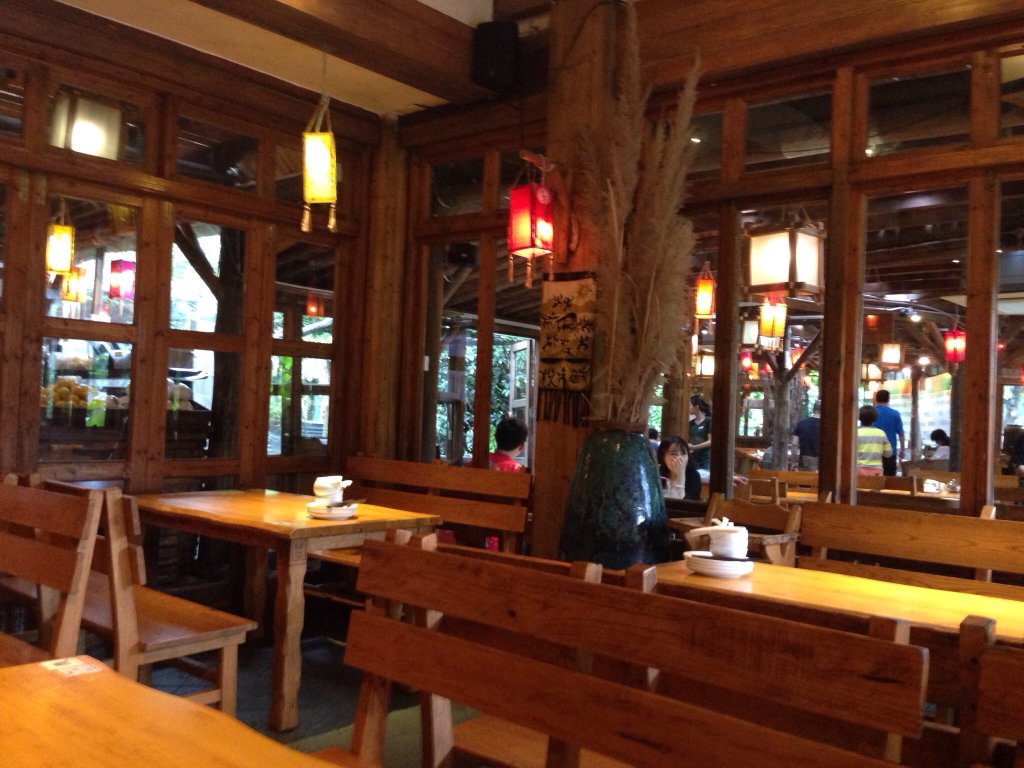 I told you about Ju la before.  It is set in the very pretty Hangzhou hills, surrounded by tea farms and trees. Birds flit and sing just outside the open windows.  We sat on the second floor, in one of the private rooms by a window with a big tree outside and some vines overhanging the window.   There were many small birds, about three inches long, with orange tops of their heads, sort of bluish bodies, and white underbodies.  Tiny and chirping and having fun. Flitting in and out of the vines and the trees.  They looked like birds somebody painted up for a Chicago Bears game, in blue and orange.

Inna Xu Yi Yin and I already had plans to go there for lunch, to plan her assault on the Hangzhou government to support young Chinese artists, as she has been doing herself for some years.  Try as she might, she could not get the Hangzhou government to support any of her artists, in any way.  She did not want money, but access – to galleries, to media, to public exposure.   I told her I knew some people in the Cultural Bureau, which is the Bureau that put on the Hangzhou Reading Festival, and maybe they could help.

As it turns out, Mr. Xiao Jun from the Cultural Bureau called me on Friday, and asked me to go with him on Sunday for lunch.   So I put the deal together for us all to meet at Ju la.

Mr. Xiao and his son picked me up at 9:30, and we drove to Ju la.  His son is 9, and has been taking English for a year.   It is pretty good, certainly better than my Chinese, and I understand my role in these events is to be the Foreigner Who Speaks English, to help the kid, let him talk with an actual meiguo (American), and not so incidentally keep up the English skills of my host.

We got some tea, and waited for Inna to come.  I brought my learning-Chinese language book (the middle school daughter of a friend of mine looked at the book and sniffed, huh, first grade).  But we exchanged words and ideas and talked about the New China (with the dad, not the kid).  Inna got up late, and called three times in the 45 minutes we waited to assure us that she was on the way.

It is probably not necessary to describe the clothing styles.  Mr. Xiao is a good guy, spent 2007 and 2008 at Nottingham getting a Master’s degree.  He is a good and smart public servant, and was dressed casually in a grey long sleeve sweater and nice pants.  His son had gym shoes and sweat pants and a down vest, also blue and orange, and a red sweater with embroidered raised enyce on the front.  Ms. Inna rushed in, a little out of breath, in her uniform.   Slightly worn blue jeans with colored patches carefully sewn into the carefully designed rips in the legs, a multicolored rope belt, and a charcoal grey turtleneck.  A black leather vest.  Imperially slim, with the frizzed hair and the huge smile and the doe eyes.  Faye Dunaway.  The room, at least, shifted.

We did introductions and ordered corn juice.  I told you before about corn juice.   Mark my words, it is coming to the US.  Hot or cold, still good.  I suppose you could add a shot of Jameson’s, if the vitamins in the corn juice were not enough.  Anyway, at this point in the lunch my role was to talk with Mr. Xiao’s son, and watch, and get caught up every now and then when someone stopped for breath.

Inna was describing her philosophy of life, the needs of young artists in Hangzhou, her work over the last few years in doing just that, purity vs. commercialism in art, and what she would like for the future.   Mostly Mr. Xiao listened, but countered with some philosophy of his own, some perspective on government support for the arts, and advice on what to do next.

I think I was in this same meeting in Chicago about 1977 – many times.   Then, it was about storefront theaters or outdoor seating in restaurants.   Informed, reasoned, but passionate case-making on one side, and well, we have to be careful, we don’t have that much money, what might happen, and we have to follow the guidelines on the other.

Don’t get me wrong.  I think we met with the right guy.  Mr. Xiao and I had talked before about the need to change the government approach to thinking, and schools, and innovation. Mr. Xiao was my guide for the Hangzhou reading festival event, where I received the gift of books from  the vice mayor of Hangzhou, so we had spent some time together.   But he was saying what an interested and helpful bureaucrat would say.

Every now and then, I would chime in with some Wisdom about Development from America.   The role of theaters in economic development in Chicago.  The concept of an arts incubator.  Government support for artists does not mean supporting the meaning of the art, it is support for the whole of the economy of Hangzhou.  Hangzhou as the cultural center of China. The standards of measurement for art- a key issue for Mr. Xiao - were unavailable.  Van Gogh was not terribly successful during his life.   Once dead, the value of his art zoomed.  So the measure of the success of art is the death of the artist?  The only quantifiable measure is the market.   There is little difference between a reading festival and an arts festival.  Both are designed to get people to think differently about their world.   La Villita Little Village in San Antonio, as an arts colony that became a tourist destination in town.  The stated goal of the central government to increase tourism to China over the next few years (2018 note – this was in 2009).  The reason why the government should do this (or something) is that some amount of failure is expected.  If success could be measured, if the externalities were few, then a private business could do this (whatever it is).   That success is measured over twenty years, not two months.   So the government role in supporting the development of the artists is a natural economic consequence of the nature of the good, art.   In twenty years, Hangzhou will be thankful it started something now.

My role was to be the objective foreign voice.  I couldn’t think of anything else.

Mr. Xiao was talking about the usefulness of soft power, another central government idea that is floating around now.  That the arts are a form of soft power.   I asked his son to open his vest, showing everyone the enyce on his sweater.   Neither Mr. Xiao nor Inna knew what that meant, but I explained, and demonstrated the soft power of NYC, regardless of the commercial origin of the sweater.   So Mr. Xiao understood.

We all left about 2:30, Mr. Xiao to drive me back to school and Inna in her white Range Rover.   The next step is for Inna to meet with the No. 1, the Party leader, in the Cultural Bureau.  He would make the final determination about access.

All in all, not bad for a Sunday afternoon sitting next to Inna with the Government across the table.   So Ju la is where I brokered my first deal.  I not only know what the word guanxi means, I think I have it, and have now used it.

Postscript – About a year later, Inna got a commission for her star young artist, Chen Dongfan, to decorate the exterior of two buildings in the neighborhood of Liu Xia, the town in Hangzhou about three miles from ZUST, my school.  Inna now has a gallery and studio space in Hangzhou and a gallery in New York  Inna Contemporary Art Space  and Chen has exhibited in shows across Europe.    Pictures of the building art below - 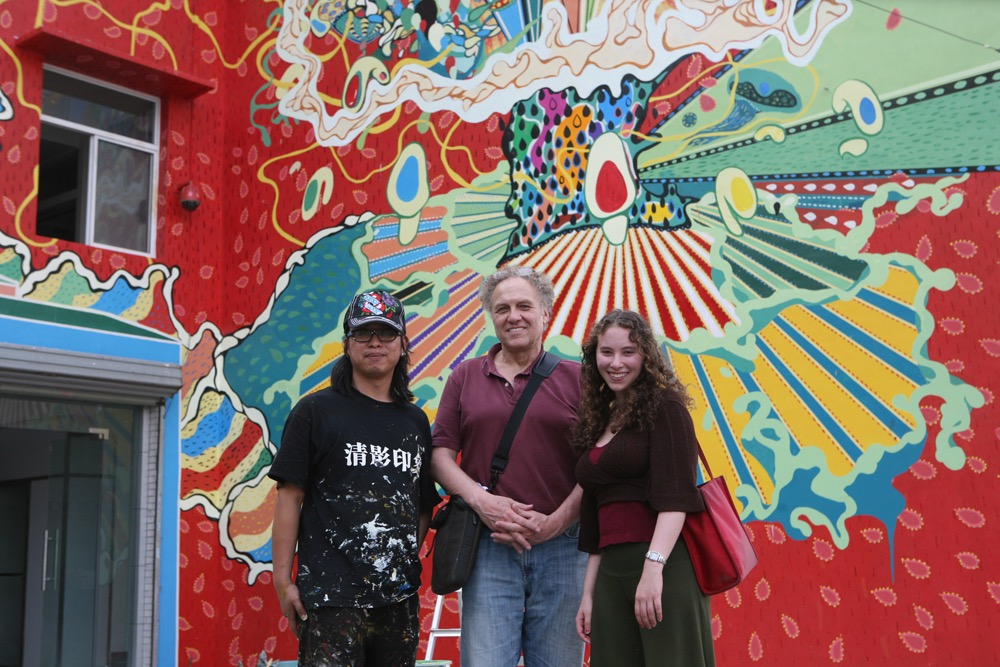 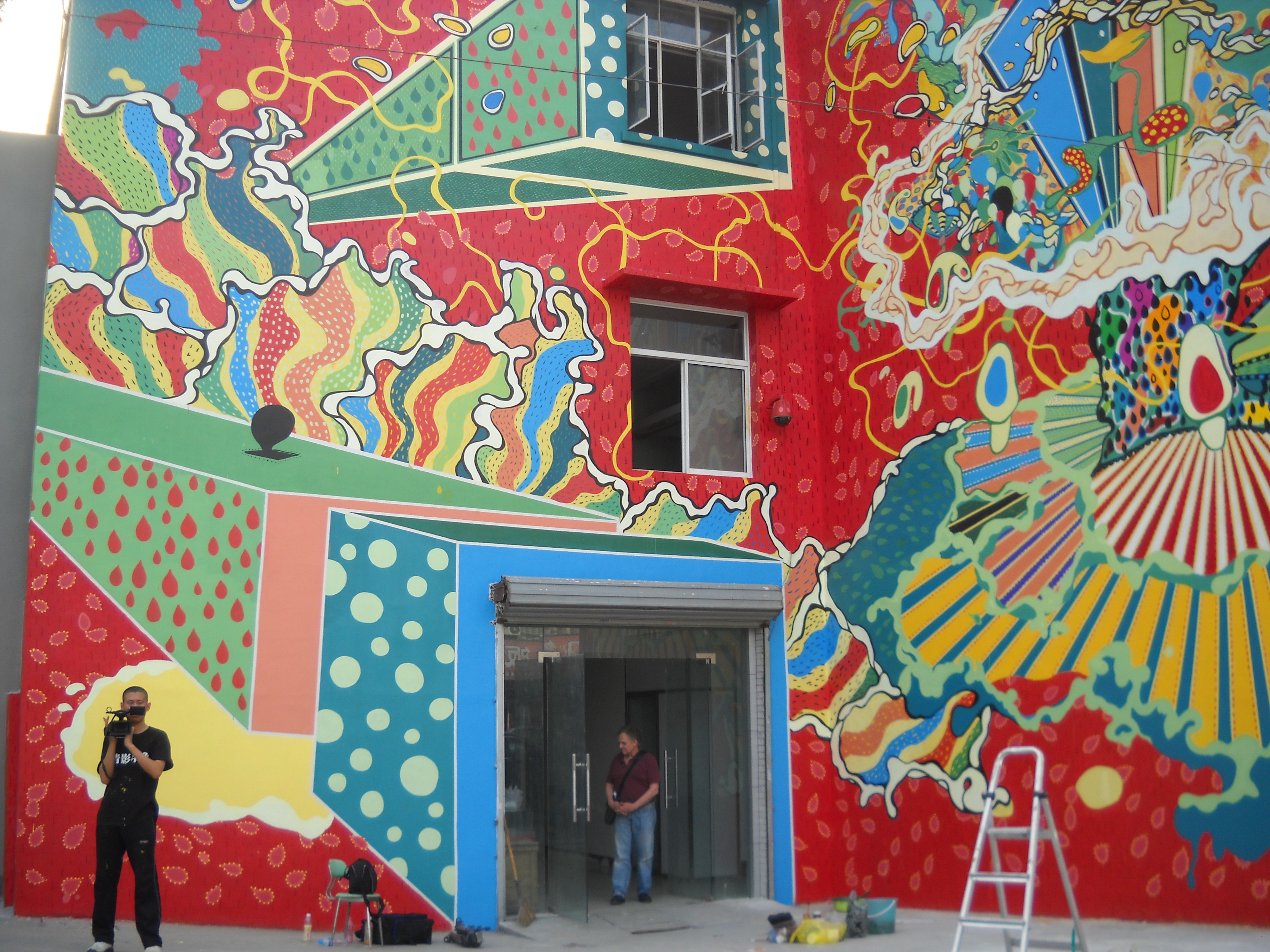 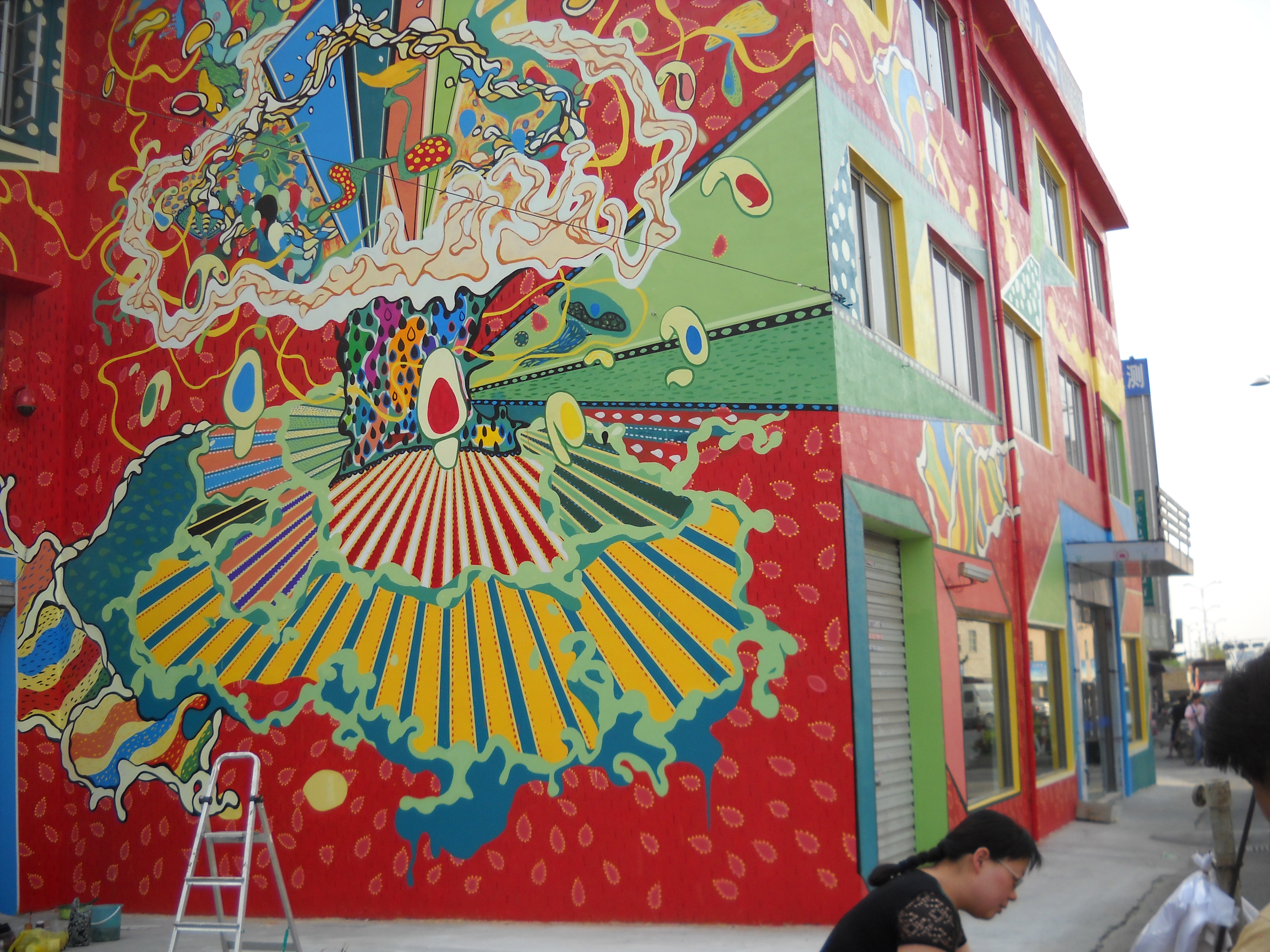 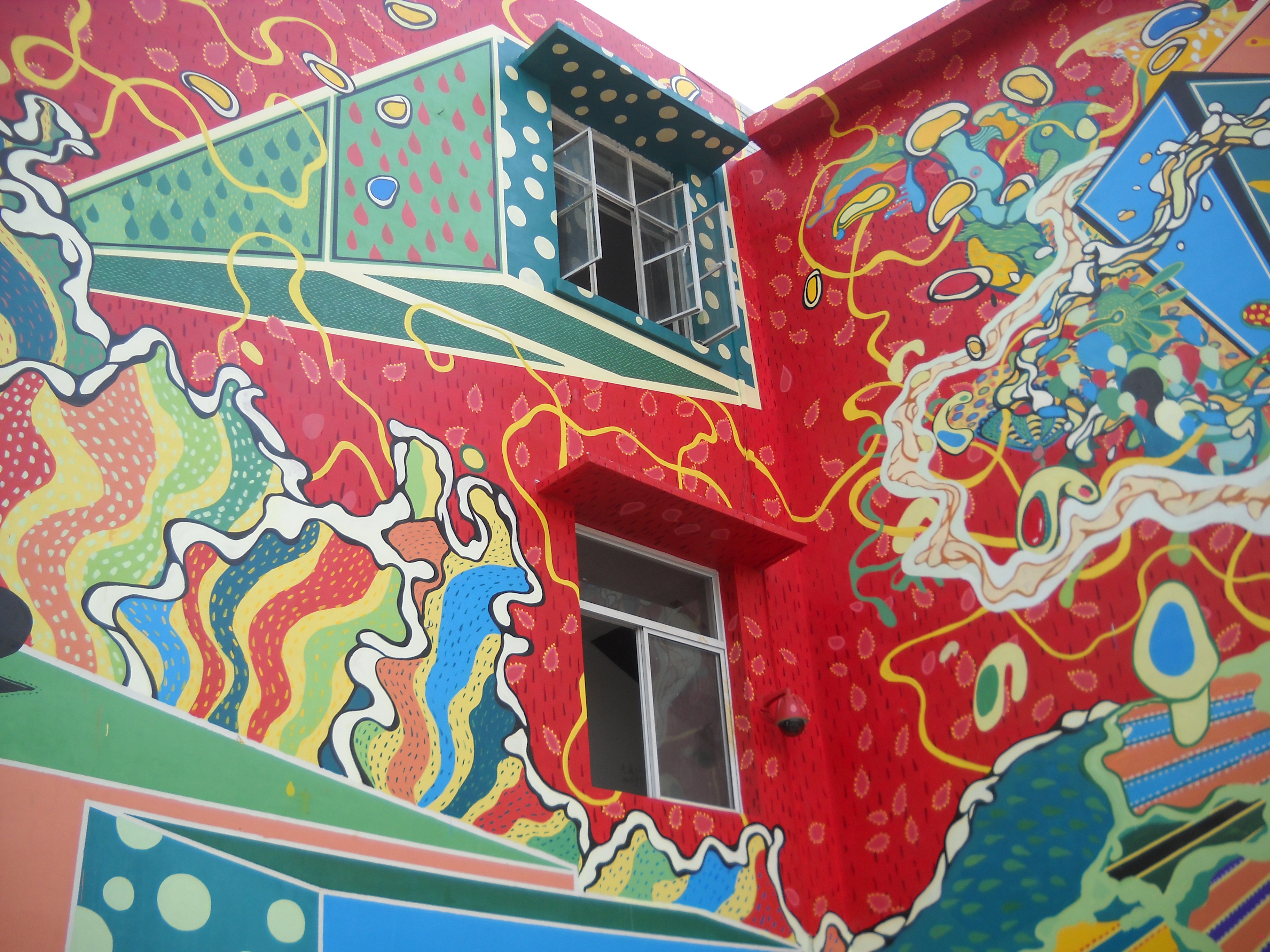 You can see more of Chen' work at -

and the work at Inna's studios -