When economics becomes a morality play

... just a comment from disparate readings in the past week –

Michael Pettis has written for years about the conundrum CCP created for itself in its development model.The model has been essentially supply-side stimulus for the last 40 years. Simplifying, there is only one answer to how to grow the economy - more construction. The costs of that model are in depressed wages, mediocre health care and education for a large share of the population and a significant wealth gap. We note that the “China Dream” promoted by Mr. Xi is not the American Dream. It is not a dream of individual accomplishment, but a dream of national rejuvenation. Now that economic model has taken China about as far as it can. More construction now is more wasted investment. As Pettis has been saying for a decade, there is a need to shift to a consumer-oriented model. His recent Foreign Affairs piece makes the case - How China Trapped Itself -The CCP's economic model has left it with only bad choices. What is needed are demand-side reforms, to health care, education, pensions, banking, the hukou, and communication. The trouble for CCP is that demand-side reforms carry with them demand-side demands for change. Demand-side means that consumer expression becomes more important than plans of leaders.

This change is very hard to do and its by no means clear that CCP can do it. Too many vested interests in the current way of doing things, and too many ways in which CCP can be shown to be on a wrong path. In Xi’s terms, to be anti-CCP is to be anti-China and disloyal. In any case, economic reform is not on Xi's agenda, as observers like Martin Wolf and Minxin Pei have noted.

Ci Jiwei is a political philosopher who wrote Moral China in the Age of Reform and the more recent Democracy in China - The Coming Crisis. He describes two forms of freedom in China – economic freedom and moral freedom. Economic freedom is the freedom to buy and sell, to profit from investment. This is not so different in China than it is in the US. Moral freedom is the freedom to think, write, worship and associate as one wishes. This is the kind of freedom we think about instinctively in the US. A modern economy needs both kinds of freedom, appropriately nurtured and constrained. One might say the more advanced, the greater need for moral freedom – the right to think as one wishes, to speculate and invent without fear, the right to be wrong without devastating consequences. The right to publicly disagree with government and the right to organize with others to craft a different idea.

China has been able to profit wonderfully in the last forty years by focusing on economic freedom – for my purposes here, interpreted as construction - public and private, apartments and airports and trains and factories. At some point, though, middle class people want more – more than just more stuff, they want personal expression, and that runs us into the realm of moral freedom, which as anyone knows from recent reading is ever more highly constrained in China now, so much so that my CCP friends characterize current times as like the era of the cultural revolution. In surveys, most Chinese remain enthusiastic supporters of CCP. But that support may not be enough if the economic model cannot adjust to new ways of earning and learning.

I came across a comment from Stephen Roach, the former chief economist for Morgan Stanley, who was a bit of a panda hugger for a while, but in the last few years has come to a different understanding. I thought his comment was short and clear in a piece by Edward White in Financial Times – Xi Jinping's last chance to revive the Chinese economy -

Roach says the sort of individualism that a stronger consumer economy requires goes against the Chinese system under Xi. “To really unleash the ‘animal spirits’ of a consumer-led society, you must look at the characteristics of what that means in other nations: it is an aspirational mindset, upward mobility, freedom of communication, shared values that continually change and move into new areas,” he says. “To a nation focused on control, it is antithetical to them.”

Chinese certainly have the aspirational mindset and a notion of upward mobility. But the control now coming out of Beijing, and likely to remain through Xi’s third (and fourth?) terms, is not a good sign. In Marxian terms, a consumer economy in one in which the individual has a strong hand to match the strength of capital. But CCP is built on control of capital.

Among all the stories of CCP authoritarian clampdown we read about now, I came across this twitter post. Not a big item by itself, but it struck me as signaling the end of an ability to do personal expression free of state supervision, free of an ability to be anonymous even for a few minutes on a subway. This is the screen one sees when buying a subway ticket - 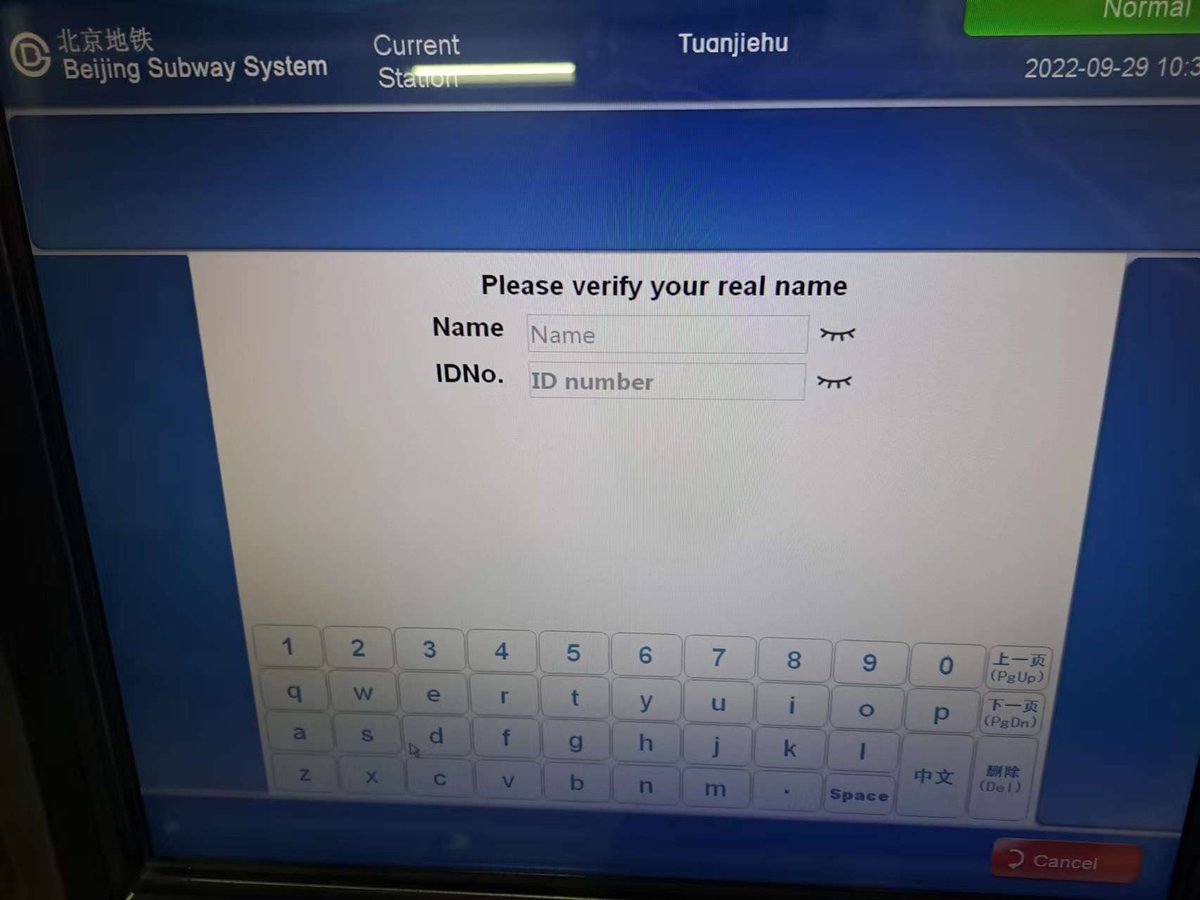 Since I left Beijing in June, one thing has changed: you now need to provide name and ID info to buy single-use subway tickets. This was one of the few things you could still do without there being a record, but now this loophole has been fixed.

And some comments, edited here -

And of course, the ticket machines only accept Chinese ID numbers, not passport numbers. So as a foreigner you either have to use the booth with a person if that's available, or hope that someone kind agrees to buy you the ticket. How hard can it be to add a passport option?

… As a long-term resident I have a transport card, so this doesn't affect me. But even my old-style plastic transport card now has to be linked to my health kit app in order to work, so that travelling without a green code would be impossible.

… Even back in 2018, China was becoming impossible for anyone without a national ID card. Most hotels won't accept foreigners, restaurants require using app which requires national ID card, etc, etc.

… To be fair, I've never been unable to eat in a restaurant anywhere in China. You may need to use WeChat or Alipay to pay, which if you don't have a Chinese bank account is a problem, but being a foreign citizen in itself is not.

… The last time back in BJ I find it extremely frustrating for not having a Chinese phone number, as I need it for WeChat => pay with it for almost everything; and need it to enter my alma mater. Then my ID hasn't expired yet so lucky me. Let's see next time.

… Nowadays it would literally be impossible to be here without a Chinese phone number, because you would need to use the health kit mini-program on WeChat. God knows when this will change.

There is no phone call, no visit to a grocery store, no trip to see a friend or go to work, no trip to the park or the zoo that is free of state supervision.The panopticon state is pretty complete.

As much as Chinese economists and leaders talk about changing the economic model, little has changed in more than a decade. Mr. Xi shows no willingness, despite speechifying, to alter the current path. If anything, China is far less open than it was a decade ago, thanks to Mr. Xi. One wonders how a more advanced economy comes into being. Not because of subway ID requirements, but because of the fears of moral freedom that would destroy CCP.