There is reason to think that Chinese in the US, whether citizens, long-time residents or new green card recipients, might hold more nuanced views about Mr. Trump.  And, in fact, they do.

But often not in the direction you might think.  Case in point – the Chinese American news, sent around the US on wechat.

You know wechat is the ubiquitous and multifaceted phone app from Tencent that has become indispensable to Chinese lives.  For communication purposes, there are two broad categories – private wechat, which functions like a group email, and public wechat, in which wechat operates as a news disseminator.

But in our new era, the politics are different.  Rather than a pro-worker or socialist bent, the wechat channels exhibit a distinct pro-Trump, pro-Republican bias.

Some bias among Chinese is understandable – they tend to be opposed to attempts to change university admissions standards, which tends to undercut hard-working and high-achieving Asians.  And they tend to be suspicious of Democratic relaxation of immigrant controls, when so many Chinese sacrificed so much to get here themselves.

One should remember that the wechat stories for consumption in America are mostly unsourced, identical across wechat platforms nationally in the US, and written in China or by Chinese working directly for wechat. Five or six national stories are reported each day, in addition to local news.

The wechat groups can be a useful and positive organizing technique.  Last year, a Chinese immigrant used WeChat to win a seat in the Maryland House of Delegates.  Lily Qi raised nearly $150,000 for her candidacy, and did so by contacting non-registered voters directly, with an appeal to change their non-voting behavior.

On the other hand, Australians are worried about fake news stories planted in the wechat groups to steer political views.  The Sydney Morning Herald documents fake news and doctored stories on local wechat groups, and comments  - With less than two weeks until the May 18 election, Chinese social media has become an increasingly powerful tool for all political parties, especially in seats with large numbers of Chinese-Australian voters...

Given its dependence on Chinese trade, and its traditional alliance with the other “five eyes” nations (US, Canada, Britain, New Zealand) Australia has become a prime target for Propaganda Ministry or United Front organizations to influence public opinion.

Bill Bishop comments at Sinocism - any government should be very concerned over the growing role of Wechat as the primary communications and media consumption tool of the Diaspora. It is after all still controllable and censorable from Beijing.

Wechat is not the only social media platform operating in Chinese, of course.  The political newsletter Popular Information reports on wildly pro-Trump stories in Epoch Times, a media conglomerate with strong ties to Falun Gong, the secretive organization banned in China. A publication with Falun Gong ties is going to be virulently anti-CCP, but they do love Trump.

Epoch Times publishes in Chinese and in English, as well as in other languages. Popular Information reports that Epoch Times “was one of the top three political spenders on Facebook in the last week in April,” outspending every political candidate in the country except Biden and Trump, according to third party research. The money was spent “to promote stories that Trump's attorney, Rudy Giuliani, has championed.”  Epoch Times spent almost as much on Facebook ads ($148,937) as did the Trump campaign ($149,610) in early May.  Epoch Times is now featuring hysterical Youtube advertising, debunking the Mueller investigation and directly promoting Trump.

From the Popular Information story.  Epoch Times is number 4 - 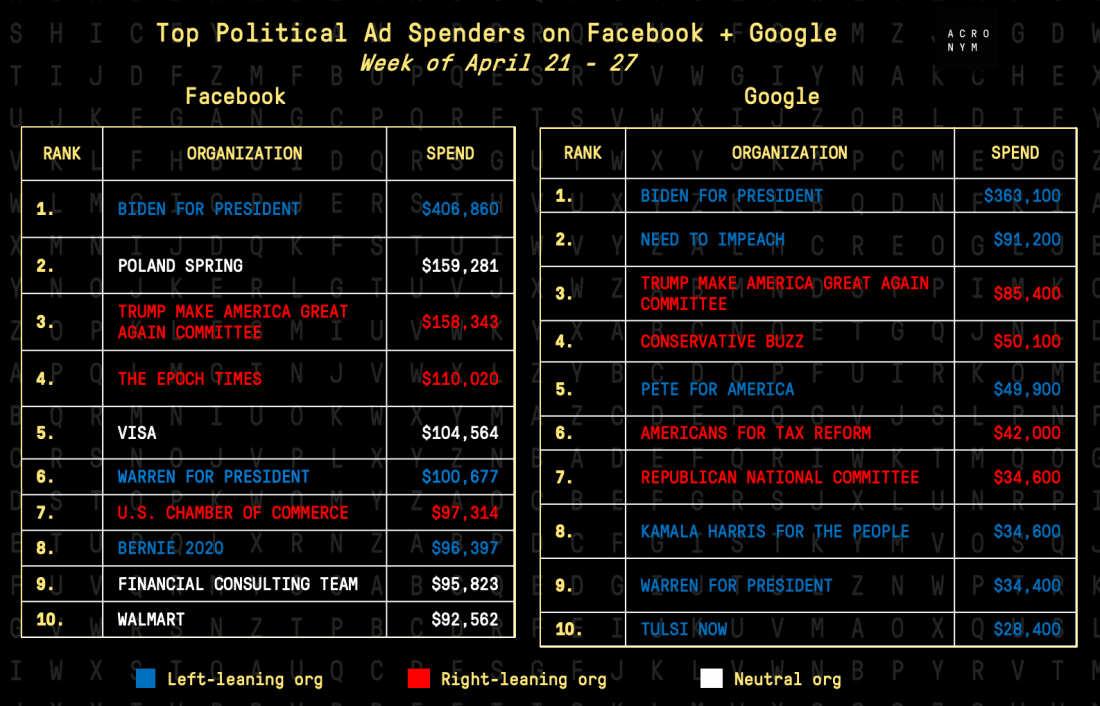 Also from the Popular Information story, about Epoch Times reporting on the FBI spying on Trump - 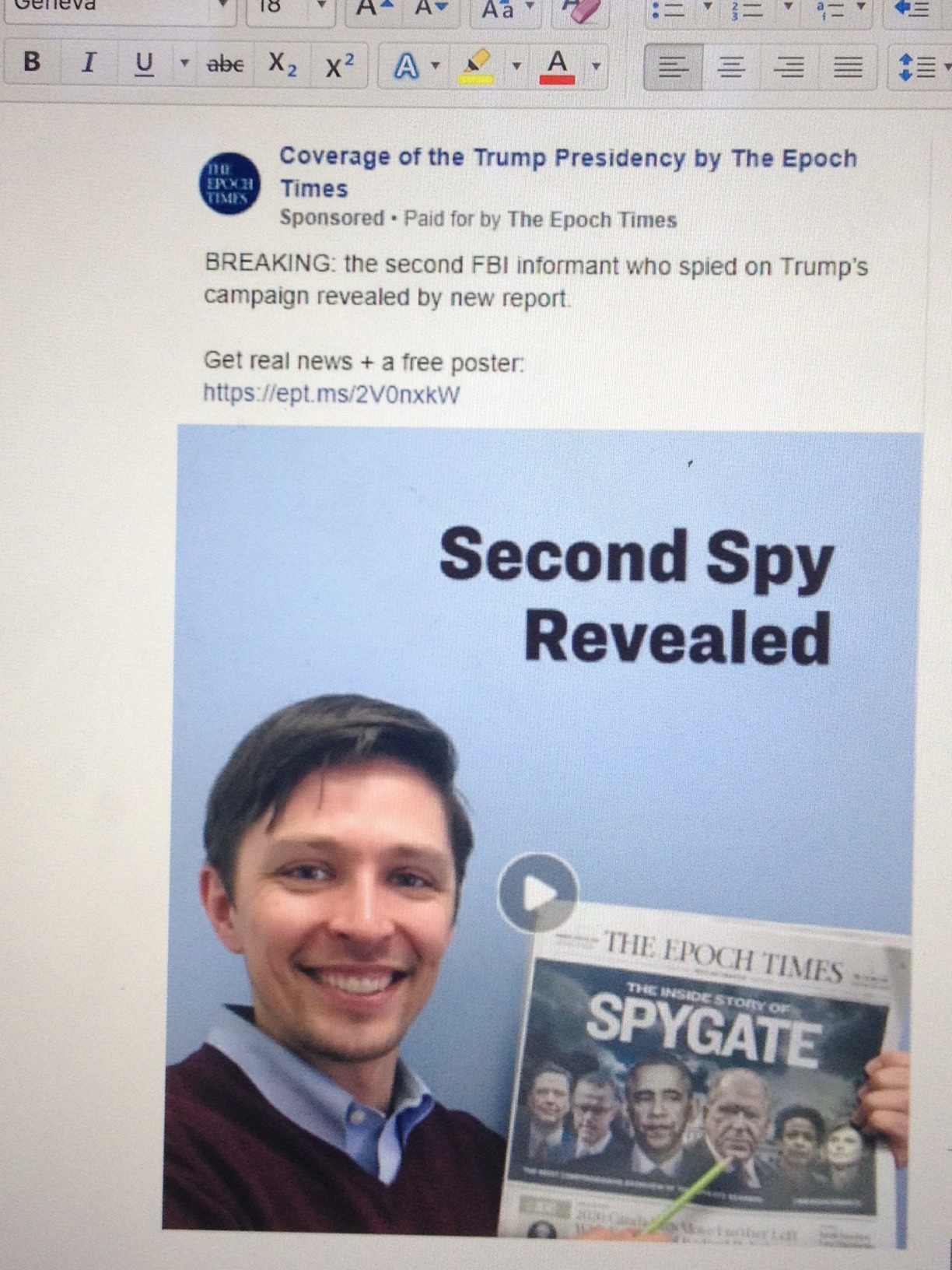 if you could read English only moderately well, wouldn’t you migrate to the news in your own native language?  Makes sense to me.  And makes sense to the wechat writers in Beijing, and to the Chinese and English language writers at Epoch Times.  Truly, for Chinese readers in America, no news is good news.