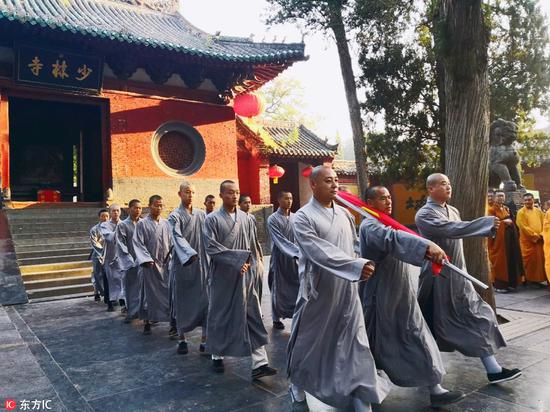 Shaolin Temple, the birthplace of kung fu and famous home of the fighting monks, has raised the Chinese national flag for the first time in its 1500-year history.

A flag raising ceremony on Monday was attended by officials from the United Front Work Department, which oversees religious groups in China because of the Communist Party's fear they may be a threat to its rule ....

This is a surprising development for Chinese, who generally see Buddhism, and the Shaolin monks in particular, as sacrosanct.   Even in an era of crackdown on religion, on Tibetan Buddhism, this was unexpected, both for the brazenness of the demand from the United Front bureau and the willingness of the monks to acquiesce.

...  While the move was applauded by some, critics said it risked tainting religion with politics.

“As a Buddhist, this makes me feel uncomfortable,” one Weibo user wrote. “Before, I thought of religious faith as pure, but now it confuses me … With patriotism interfering with spiritual life, there is no space at all for individual thought. Is this what a harmonious society looks like?”

Another wrote: “The Buddha and Marx have shaken hands … Buddhism is meant to cultivate the mind, body and spirit – what has it got to do with politics? Haven’t the monks in the monastery renounced worldly living? I feel uncomfortable and just think that raising the national flag at the temple is simply not appropriate.”   SCMP - Red flag for Shaolin monks The pressure on the Shaolin monks is likely related to two developments – first, the Shaolin monks have had their share of scandal, as they have become a global revenue generator from shows and demonstrations. The government will always take a strong interest in a historical cultural phenomenon that generates millions of dollars each year.  For more see Rise and fall of CEO monk.

Second, forcing the monks to raise the flag is a sign to all other religions in China, particularly Catholicism, that there is no greater force than CCP in the universe.  This has greater significance in light of the concurrent deal between the Vatican and the government to permit government involvement in selection of bishops in China.  This is anathema to many Chinese Catholics, in China and outside, but the Shaolin flag-raising emphasizes that CCP will brook no competitors for power.   (For more on the new era of crackdown on Christianity, see for example this South China Morning Post piece -   Christianity crackdown) 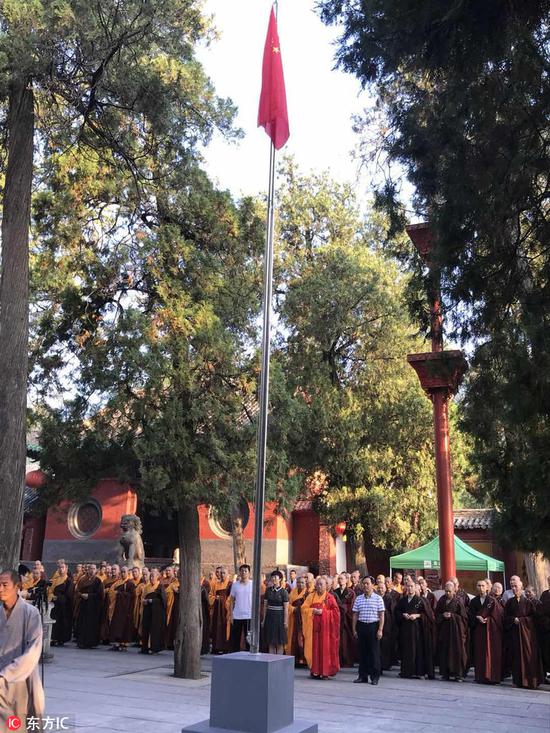 There is another aspect to the Shaolin development.  The Shaolin Buddhist monks do not owe allegiance to the Dalai Lama, but in the current environment in China, religious activities must be dealt with directly and forcefully.  The Dalai Lama does not cooperate, so pressure must be brought where it can.

The institution of the Dalai Lama, and whether it should continue or not, is up to the Tibetan people. If they feel it is not relevant, then it will cease and there will be no 15th Dalai Lama. But if I die today I think they will want another Dalai Lama. The purpose of reincarnation is to fulfill the previous [incarnation's] life task. My life is outside Tibet, therefore my reincarnation will logically be found outside. But then, the next question: Will the Chinese accept this or not? China will not accept. The Chinese government most probably will appoint another Dalai Lama, like it did with the Panchen Lama. Then there will be two Dalai Lamas: one, the Dalai Lama of the Tibetan heart, and one that is officially appointed.

To further confound CCP, the Dalai Lama issued a statement in 2011 –

Bear in mind that, apart from the reincarnation recognized through such legitimate methods, no recognition or acceptance should be given to a candidate chosen for political ends by anyone, including those in the People’s Republic of China.  Retirement and Reincarnation Message

We have no king but Caesar?

The required Shaolin flag raising is, among other symbolic representations, a response to a Dalai Lama checkmate.  Hell hath no fury like a CCP scorned.