The first is Huntington’s civilization categories.

The second maps countries that signed letters to the United Nations Human Rights Council in opposition to and in support of China’s ethnic cleansing policies in Xinjiang.

The third maps countries with substantial debt to China, as a per cent of national GDP.

The Clash of Civilizations according to Huntington (1996), as presented in his book.  Archived at Geography of War, course at Middlebury College.

The Second Map - Uighurs - Which Side are you on?

Many sources confirm that up to 1.5 million Uighurs in Xinjiang are in concentration camps, with the goal of erasing their native Muslim culture and transforming them into good Chinese citizens.

From SupChina - An extraordinary event in human rights diplomacy happened in the last week: Two unprecedented letters to the president of the UN Human Rights Council were signed by dozens of countries expressing either support for or condemnation of China’s treatment of Turkic Muslims in the Xinjiang region. 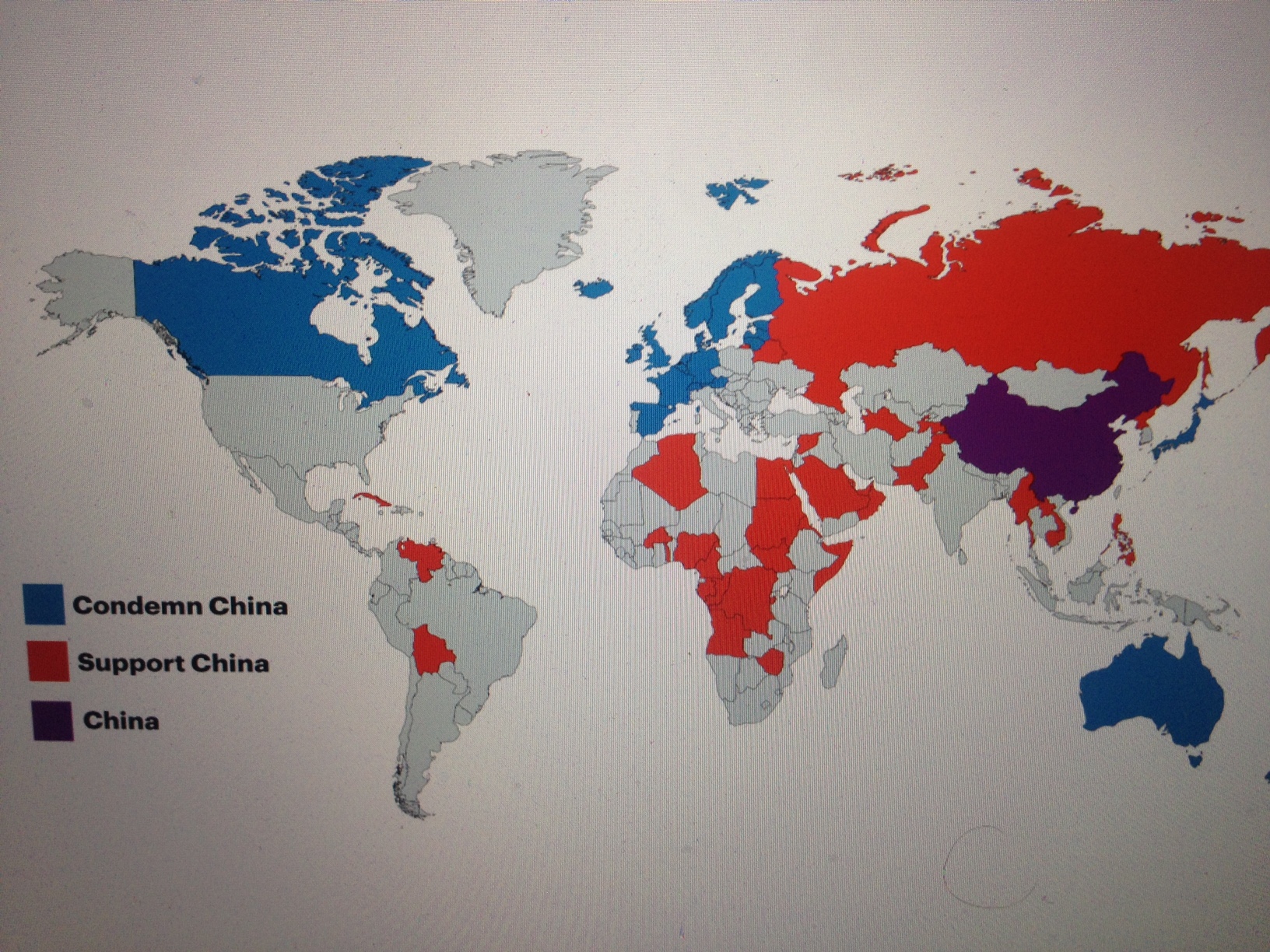 Photo credit: A visual representation of countries that signed letters to the UN Human Rights Council against and in defense of China’s ethnic policies in the Xinjiang region. Map made by Reddit user Hamena95

Twenty-two countries signed the letter of condemnation.  They are in blue in the map above.

The Chinese government responded with a letter of its own. Reuters reports that 37 countries joined the Chinese response, commending China’s remarkable achievements in human rights.  Such counter-terrorism and deradicalization measures as have been undertaken in Xinjiang are to be applauded.  Those nations are in red in the map above.

What stands out is the US failure to condemn Chinese actions, although we understand that to be attributable to the views of our current dear leader.  The US dropped out of the Human Rights council in 2018.

What also stands out is the failure of any of the Islamic world to condemn Chinese actions against Muslims in Xinjiang.  A number of countries, notably Saudi Arabia, Egypt and Algeria signed on to the Chinese response to the original condemnation.  And notice the support for China in Africa where China is doing infrastructure and resource deals, and Russia.

It is easy to see Huntington’s cultural clash in the current US-China conflict. Individualism v collectivism. World hegemon v rising competitor. Modernity and traditionalism. Its surprising how quickly the world alliances have formed.  In the third map, we begin to see why.

The Third Map - Debt and Loyalty

The third map is from a new working paper on Chinese foreign lending by Sebastian Horn, Carmen Reinhart and Christoph Trebesch.  They identified nearly 2000 foreign loans and 3000 grants to more than 150 countries totaling about $530 billion from 1949 to 2017.  This is apart from purchases of foreign bonds.

As of 2018, the Chinese government holds more than five trillion dollars of debt of the rest of the world, equal to about six per cent of world GDP.   As I have noted elsewhere, this lending is mostly to low-income developing countries (LIDC), oil exporters, and countries in the path of the OBOR projects.

The regions most indebted to China are Far East Asia and Central Asia, including highly exposed, small economies that are in geographic proximity to China such as Laos, Cambodia and the Kyrgyz Republic …. Next come Sub-Saharan Africa and Latin America, as well as some parts of the MENA (Middle East and North Africa) region. The debt flows to Eastern Europe are smaller, when measured as a share of debtor country GDP, but the amounts of credit to Europe have been growing substantially over the past five years. 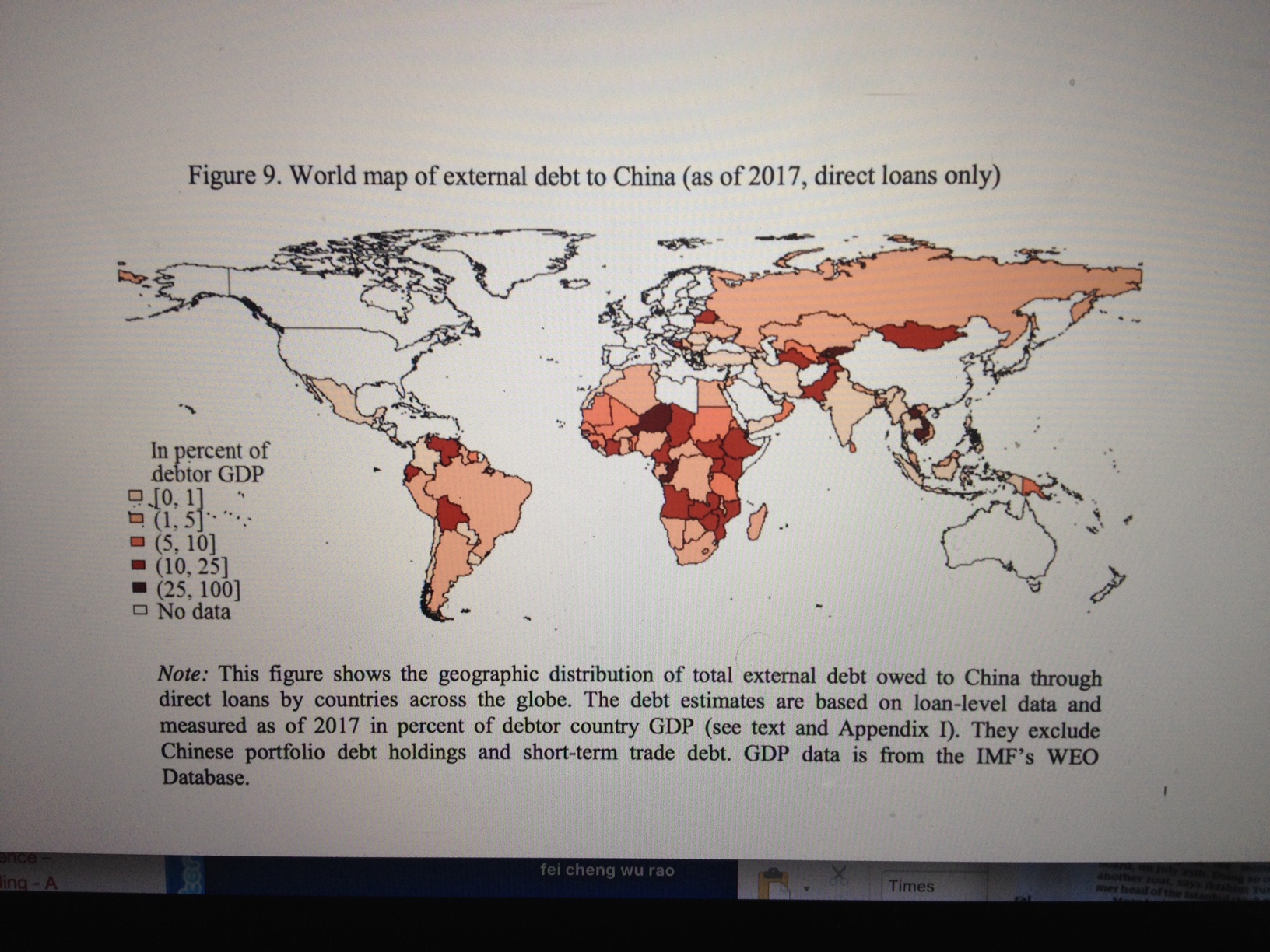 Note the similarities in maps two and three.

Notably, no Islamic nation condemned China for its treatment of Muslims.  Islamic northern Africa and much of the middle east and the –stans are recipients of substantial Chinese lending.  Even India has failed to condemn China.

No middle eastern or southern Africa country joined in the condemnation. Several southern African countries have more than 25% of their GDP in debt owed to China.

Nearly all South American countries have more than 5% of GDP owed to China.  None joined in signing of the letter.

Notably absent from the original UN letter were Italy, Greece, Turkey and all of eastern Europe, all recipients of large amounts of Chinese loans or expected beneficiaries of the OBOR.

Signatories to the UN condemnation letter were the “west” including Scandinavia and Japan and all the English speaking nations except the US.

Samuel Huntington described about ten cultures in his 1994 book.  The big three civilizations he described were the west, the Islamic world, and Sinic, mainly China.  He described potential alliances of these with other civilizations – Russia with China, the Islamic world with China, based on similar thinking about the importance of history and desire to maintain distinction from the west.  Huntington's categories are broad, and not without critics.

Critics of the clash theory have pointed out that significant parts of the Islamic or Sinic world have modernized, particularly leadership and business interests. And any one nation, any one civilization, is far too complex to be accounted for in Huntington’s model. The populist uprisings in the US and Britain and Europe certainly point away from modernism.

Well, ok.  The world is big and complicated.  Capitalism is no friend to democracy.  Huntington did not see a “winner” in the world civilizational struggle in his 1993 Foreign Affairs article.

But it sure looks as if money speaks much louder than human rights talk, and Huntington was clearly onto something, way back in 1993.

For those of you want a bit more data, below is a listing of countries in Africa that have –

This is from Sinocism -

The clash is looking less like a clash than a fait accompli.  And money is the root of ... something.